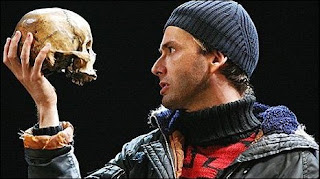 I was far later to bed than I should have been last night; my dog was asleep on my lap and I didn't want to disturb him. When I got to bed I slept well, but when I woke shortly before 5am my right leg was still very painful.
I've pulled a muscle down below my knee; it still hurts.

Over brekkie the SkyPlus box wasn't working at all so I pulled the thing's plug and re-booted it. Eventually I got it going again and I watched last night's episode of "The Last Man on Earth". It was the last one of the currrent series; it ended on something of a cliffhanger. I'm quite looking forward to the next one. I then watched the last bit of last night's Game of Thrones (the bit I slept through). I've not been overly enthusiastic about that show lately but last night's installment took an interesting turn. I think they must seriously have run out of ideas as they resorted to Nudey-Dragon-Girl getting her jubblies out (and to think I slept through that). Most entertaining, but no serious substitute for a plot.
I thought she'd got a clause in her contract about not having to get them out any more; perhaps the show really is struggling if they are having to resort to this level?

I quickly had a look-see on-line. Again LinkedIn was suggesting I might like to join the navy. I decided that if that was all the Internet had to offer I would set off to work and see what the radio had to offer.
The radio said that a survey has shown that women churchgoers live longer than us heathens. Much was made of the fact even though few few explanations or reasons were given

I was then rather worried by the fact that the police have been unable to track down the owner of a missing foot. A severed human foot was found near Bath some time ago and the Old Bill haven't managed to track down its owner. You would have thought that whoever it was might have a rather distinctive appearence?
Interestingly after I'd done my bit at work the evening's news told of a severed head which has been found in Cambridgeshire.
Something of a theme here?
Once home I took "Furry Face TM" round the park. As we walked we met a small beagle called Sherlock. The chap walking Sherlock was having a serious domestic with the small children in his care. They'd only come along to go to the playpark and had no interest in walking round (and I quote) "crap fields with that dog". Oh the joys of wilful children.
As we walked we saw some slightly older children laying on the grass and snogging. They do that...