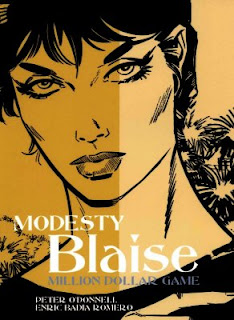 I was awake at silly o'clock (as I so often am) and with little else on the agenda I thought I'd watch a little telly. I'd recorded "Locked Up"; a Spanish show about a rather foxy prisoner who is having a tough time behind bars. Usually I'm not keen about watching shows with subtitles, but in this case I've made an exception. There was more than enough rampant jubbly-waving to make the subtitles irrelevant. I might even watch the second episode. I think it airs on Tuesday.

As I put my shirt on I watched my dog who was pretending to sleep. His head was down and every time I looked at him he closed his eyes to feign sleep. However a frantically wagging tail gave him away.

With the telly program finished I set off to work. As I droveI listened to the news on the radio. Apparently over two hundred assorted celebrities (including Steve Coogan, Sir Patrick Stewart and Brian Blessed) have signed a letter saying how they all feel that Britain would be better off remaining in the EU.
Information on exactly to whom this letter is addressed is rather vague, and the letter has been dismissed by the leave-campaign because they don't like it very much. The leave campaign seem to be doing this an awful lot at the moment.

There was also talk of who will take on the role of James Bond now that Daniel Craig is (apparently) standing down
There are those who feel that the time is right for a woman to appear in such a role. I thought this was something of a rather old idea; after all Modesty Blaise is older than I am (did you know that Sparks once recorded a theme song for a Modesty Blaise series that never aired) and April Dancer is even older.

I got to work for the early shift. With the vagaries of my shifts today was day five of a five-day week. I realise most people do five-day weeks all the time. I used to for many years but now I'm finding them very hard work.
Working longer days (but less of them) suits me far more.

After work I set off to McDonalds where I met "er indoors TM", Jimbo and Stevey. Whilst in the queue a random woman greeted me with a hearty "Hello Dave". I smiled sweetly and made some small talk; I had no idea who she was...
"er indoors TM" then went home to walk "Furry Face TM" and we went on to astro club. Tonight's meeting wasn't too bad at all.
Being secretary is somewhat easier on the club night than being treasurer was. Now to chase up a speaker for July and to sort out name badges for the committee...