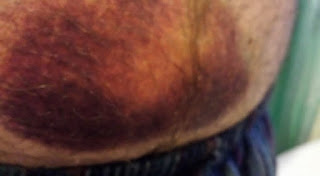 I was out like a light last night. I would have slept better had I not woken at 4am shivering because an alliance of "er indoors TM" and "Furry Face TM" had nicked all the duvet.
I wrestled some small part of the duvet back and slept through to 7am.

Over brekkie I had a look-see on line. Among my emails was one telling me of a vacancy at Maidstone hospital. I'm tempted to apply for that. And there was quite a bit of dross too. As well as Amazon trying to sell me what I've already bought from them there was the usual drivel from LinkedIn, an invitation to go on a geo-booze up in Croydon, a couple of requests for me to do on-line surveys and the usual helping of spam. However there was no email confirming the chap I was hoping might give the talk at astro club in July. I've emailed him a few times; I think that if he's not replied after three weeks of trying either I have the wrong email address or he's not keen. I've now stalked him down on Facebook and sent a message. Here's hoping. Failing that would any of my loyal readers care to give a lecture on any topic of their choice (as long as it is vaguely astronomical) on the last Friday of July?

I had a look on Facebook; one of my old muckers has had a hip relacement operation. My dad had that a couple of weeks ago. Now Adrian's had one done. He's only a month older than me. Makes you think, doesn't it?

I took "Furry Face TM" for a walk round the park. He mostly ignored all the other dogs who wanted to play. But I had a couple of incidents. At one point he was bimbling about some twenty yards behind me. I called to him "Come on straggler!" A passing normal person took offence at the term "straggler". Amd then a little later when preparing to cross Francis Road I told him to "wait up". Another passing normal person demanded that I repeat what I'd said to him. I would have thought that someone clearly in their seventies wouldn't be going round trying to pick a fight.

I came home and my dog scoffed his brekkie and took himself off to bed. I had a quick look-see on-line and then set off to work. Slowly. I went to work via McDonalds. It was a bright morning, and a caramel frappe together with a sausage and egg McMuffin slipped down very nicely. There are those who don't like McDonalds. I can't see why not. Good food prepared quickly which is not overly expensive is not to be sniffed at. It has been my experience that the entire family can eat at Maccy Ds for less than what one person would spend in a "proper" restaurant. And be seated, fed and out before the waiter of a "proper" restaurant would come over to take the order.
I also stopped off at the cheapo-bargains shop where I got half a dozen sandwich boxes (just in case).

I got to work with a few minutes to spare, and I did my bit. I spent much of the time wondering about the vacancy at Maidstone. Should I apply for it?
Over lunchtime I checked my emails (on my phone). A recruitment agency had contacted my through the much-maligned LinkedIn asking if I would consider working in the private sector's blood testing labs. Would I? I don't know. I didn't think there were many opportunities.