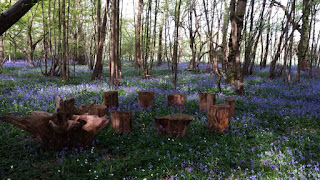 I got rather frustrated when I had a look on Facebook over brekkie. A friend of a friend (who is no intellectual genius) had posted that she felt that Britain should leave the EU because she didn't want foreigners commanding the British army. I'm not sure where this flight of fancy came from, but it was then followed up by all sorts of nonsense about voting to remain in the EU being disrespectful to those who fought Hitler. Those posted on the thread were incensed about Britain having to comply with EU regulations whilst at the same time being unable to provide a single such regulation. No one actually said "I'm not racist but I don't like foreigners" but that was the gist of what many were saying.

I then had an email. A new geocache had gone live not five miles away. Looking at the map it seemed to be in the back of beyond so I popped the lead onto "Furry Face TM" and we drove off in hot pursuit of the First to Find. We got as close as we could in the car and then...
I was a little bit miffed. Geocaches have terrain ratings so you know how hard it is to get to the things. This one was marked as T1.5, the easiest you can do if you are not in a wheelchair. We walked for five hundred yards. Well marked footpaths got us to within eighty yards of where we needed to be and then we had to jump a small stream and hack our way through the undergrowth.
The cache was called "Fairy Circle"; I soon found nine logs laid out as a fairy circle. But the GPS was a bit jumpy. After seemingly ages I was about to give up when I could see people in the distance. Hoping it would be fellow hunters of tupperware I waited for a while. It was fellow hunters of tupperware. It was good to catch up with Paul and to meet his brother in law. Together we hunted for half an hour but to no avail.
I picked up my dog and carried him back through the thickets. He was able to jump the stream himself.

I had a vague plan to go to Dymchurch today but "Daddies Little Angel TM" had other plans, so we came home. I registered my geo-failure on-line then popped into town. I found the milk shake shop to be closed again (does it ever open?) and with the astro club stuff done at the bank (for the last time) I drove out to Argos to collect the rubber dingy I'd ordered.

With shopping done I watched a film over a spot of lunch. "Ex Machina" is a film I've wanted to watch for some time. It started and ended well. I'm not sure about the middle; I slept through that part.
I then wrote out the minutes of last night's astro club committee meeting and popped round to "Daddies Little Angel TM". She was staging a family meal. "My Boy TM" arrived and there was sad news. His beard had been put down. For some reason every time "My Boy TM" looked at "Stormageddon - Bringer of Destruction TM" so the little one cried.

We had a rather good bit of dinner. Now to see if there are any leaks in that rubber dingy. best to test it first in the living room rather than have it sink on its maiden voyage on Sunday...