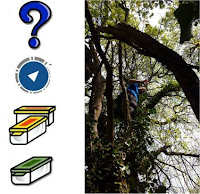 Over brekkie I had a look-see on-line. The chap who hid the geocache I couldn't find yesterday has put up another hint. Apparently he's hidden it under a rather enormous tree stump. I think it can stay where it is; I've struggled out there once already.

Yesterday I finished up by saying "Now to see if there are any leaks in that rubber dingy. Best to test it first in the living room rather than have it sink on its maiden voyage on Sunday..."
The dingy seems OK, but there was a split in the pump's hose. So we took the "er indoors TM" -mobile to the garage, left it there, and went on to Argos to register out displeasure.
To be fair the people in Argos were helpful and sorted us out a new pump (without a hole in it).

We then went for a little outing to Kemsing. Regular readers of this drivel may recall that a couple of days ago I spent half an hour scrambling all over a tree trying to find a geocache. I went back to that tree and found the thing in less than two minutes.
From here we had a little pootle through the woods then drove up to the village sign where we played a wherigo. I spend hours making these games for others, and rarely get a go at playing one myself. This one was not unlike one I wrote from scratch; you start off and it tells you how far away you are from the final geocache. That's all you know. So we started off and found we were a few hundred yards from where we needed to be. We chose a direction at random and (pausing only briefly for "Furry Face TM" to bark at the locals) walked for a hundred yards. We checked the game and saw we were a few hundred and fifty yards from the final location... And so we proceeded. To be honest there were only so many directions in which we could go, and it was a rather scenic village through which to wander.
It probably took us longer to complete the final twenty-five yards than it did the rest of the game.

We failed utterly at hunting down a cache hidden in a phone box, and after a quick ice-cream we drove off down the road for a mile or so. As we drove I got a little stressed at other drivers. Do they *really* have to be quite so close behind?
We parked up and walked across fields and woods filled with bluebells to sign a challenge cache. This was one you aren't allowed to claim until you have found (at least) one hundred geocaches twice in one calendar month. We did that last weekend in Cornwall.
We did another quick cache as we were in the area then made our way home.

As we drove we got a message. A friend of a friend's friend's cat's aunties next door neighbour's friend's friend had a canoe they didn't want. It was going free to a good home. Did I want it?
Whilst there are no hard-and-fast rules about aquatic geocaching I have formed the distinct impression that it is the done thing to take to the high seas in a canoe. Only the Great Unwashed set sail in rubber dingies, and consequently are somewhat looked down upon. So, having dropped "er indoors TM" off at the garage to collect her car I drove round to Birling Road to have a look at this free canoe.

I must admit my hopes weren't high. When I arrived the girl greeted me with the news that it needed a little work doing. So I told her I had only one question; does it float? If it floats, all else is piddling details. On reflection her answer was something of a giveaway. She said "not very well". That doesn't really answer the question does it? Things float or they do not.
So we went to have a look at the canoe.
It was a bit tatty, but what do you expect for free. However the first thing I noticed about it was the foot long split along the top. And then I saw the gaping hole in the underside where a previous mariner had been torpedo-ed. This was no small leak; there was a hole beneath the water line through which you could stick both hands.
She seemed rather disappointed when I declined her kind and generous offer.

I came home, got a bucket of water, and washed the bird poop off of my car. I could have done a much better job of cleaning the car, but washing bird poop was good enough for me. I then tested out the new pump. It worked rather well.

"er indoors TM" then got busy in the garden. I got busy watching Star Trek...