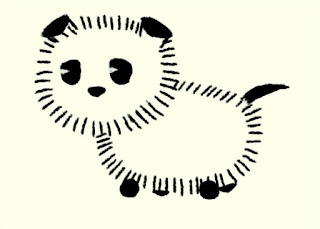 Having spent much of yesterday evening falling asleep in front of the telly I wasn't impressed to find myself awake at 4am this morning. I wasted an hour trying to get back to sleep before watching "Dad's Army" over brekkie. I then did a little channel-hopping and discovered "Irish Paint Magic". At first sight the show struck me as something of a Bob Ross rip-off.
It turns out that the chap presenting the show is actually a Bob Ross qualified instructor. Mind you whilst his painting was good, the chap doing the painting did seem to be somewhat stilted. As the episode went on it struck me the chap was trying to imitate what Bob Ross did in his shows. He would have been far better off trying to do his own thing.
I then spent five minutes solving another geo-puzzle before setting off to work.

As I drove to work the pundits on the radio were interviewing the editor of the Sun newspaper. His paper has fallen foul of the press regulator. A few months ago he published a headline story claiming the Queen was in favour of Britain leaving the European Union. This story was proved not to be true, and the Sun has ben forced to publish an apology.
The chap being interviewed was rather recalcitrant. He said they'd published the apology and the regulator's decision because they had to, but he remained adamant that his story was true.

I got to work and spent much of the day in something of a sulk. There was a geo-mission planned for today. Several of my friends were off to Essex. But taking the day as holiday wasn't practical. So I spent much of the day looking out of the window and thinking about what might have been.
Mind you the weather forecast had been for heavy rain for today; it did rain for most of the day. I suppose I would only have grumbled had it rained on me whilst I might have been out and about.

Once home I took "Furry Face TM" for a walk. We were on the final stretch on the way home through the Co-op field when we had a little episode. On our walks my dog plays, scraps, fights and ignores all sorts of other dogs. So I didn't really think anything when he was playing with a rather small bundle of fluff. But when I put his lead on before leaving the co-op field the little bundle of fluff puppy started crying. It was then that I realised that no one was with this baby dog. I looked around, but no one was to be seen.

I stroked the puppy and she stopped crying; I stopped stroking her and she started crying again. So I had a look at her collar. There was a phone number. I rang the number three times; each time the thing rang and rang with no answer. There was a post code and a house number on the dog's collar so with a little help from Google I had an address which was a little way away.
I picked up the little puppy, tucked her under my arm and we set off to take her home.

I found the house and knocked on the door. I could hear movement inside and eventually a rather "council"-looking woman answered the door and asked what I wanted. I said "your dog...", whe replied "what about it?" in a rather confrontational way. So I waved the puppy a bit and asked it it was her dog. She looked at the dog (clearly not having yet seen her) and said that she was her dog. There was a silence which stretched for a while before I asked if she wanted her dog back.
Eventually this "delightful lady" took her dog and just stared at me. I stared back for a while, then walked away. As I walked she suddenly realised what had happened and called after me to ask how it was that I'd turned up on her doorstep with her dog. I explained that I'd found her dog some distance away, and had gone to not inconsiderable inconvenience to return her dog out of the goodness of my heart. She stared at me as though I was speaking in some foreign language, so I repeated what I'd just said. She then explained to me how far I claimed I'd walked with her dog, and asked me what her dog had been doing in the co-op field. Clearly she didn't beleive what I'd told her.
Looking back I should really have offered to have taken her dog home with me. Perhaps I should have a word with the local dog warden?

We came home, and I then drove round to Steve and Sarah's. I spent a few minutes enjoying their new sofa, then we carried the old ones to where they could be collected. The old ones weren't so much heavy as awkward.

A rather good bit of dinner went down very nicely, then we watched "Billy Elliott". I've not seen that film before. It was quite good...