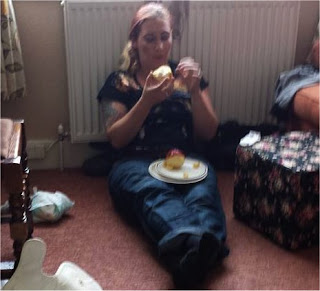 A restless night; that dog really should stay in his basket. "er indoors TM" was up early and offered to cook my toast. That was nice. Over brekkie I did a little astro secretary-ing. The speaker we thought was long-since booked for the July meeting isn't replying to emails. I chivvied him from a different email account, then played about on badgemaster dot co dot uk designing badges for committee members.

"er indoors TM" said goodbye and set off. I would have liked to have gone with her; there was a lesson today in how to use GSAK. GSAK is a wonderful bit of software with which you can program your GPS unit with most (but not all) of the live geocaches in any given area, and even some of the dead ones as well.
But during the week things had taken an unexpected turn so I collected "Daddies Little Angel TM" and drove down to Hastings to see my dad instead. He's not been well lately.

Despite some iffy weather the journey to Hastings was uneventful. We arrived and it wasn't long before "Stormageddon - Bringer of Destruction TM" had taken a bite from every bit of fruit in my mum's fruit bowl. To make amends "Daddies Little Angel TM" ate some of the fruit. She quote liked the pear. How can you get to be twenty seven years old and never had a pear before?
Dad seemed to enjoy our visit; he was looking better than he was the last time I saw him.

We had a rather good bit of dinner, then had to make a move. It would have ben goood to have stayed all day but today was one of those days when I was pulled in several directions. We then came home and made our way to WIllesborough where the clans gathered to say goodbye to Emily. Billed as a tea party I shifted four pints of ale before coming home and walking "Furry Face TM" into a thunderstorm.
Needless to say we cut our walk short...