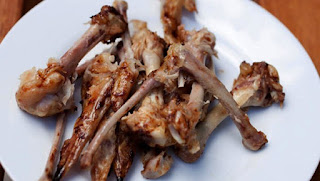 The weekend was rather a busy one; I suppose that it's no surprise that I slept like a log last night. Out cold for over seven hours. That rarely (if ever) happens these days. I got up and found my little dog was still asleep. After his tea he went straight to his basket last night and was still there this morning. He also had found the weekend rather wearing.

I tried solving a geo-puzzle as well. I would have done better had my lap-top not been on a go-slow. It is not the most up-to-date device in the world. I'm beginning to wonder if it will soon be time to replace the thing with a newer model.

I gave up fighting with my lap-top and took "Furry Face TM" for a walk round the park. As we went we had the usual episodes of my dog being scared of other dogs, my dog scaring other dogs, my dog humping other dogs. He tried to hump OrangeHead's dog. It was as well that at the time OrangeHead's dog was being walked by OrangeHead's stunt double. I'm assuming it was her daughter.
There was a worrying few moments when "Furry Face TM" was choking. I pulled chicken bones from his mouth. I must admit I like KFC, but I don't throw the bones across the park; especially not when there is a bin not ten yards away.

Once home I re-booted the lap-top and had another go at geo-puzzling; rather more successfully this time. I wonder if the thing realised I was getting a tad hacked off with it.
I saw a few messages from friends going off on a geo-mission today. It would have been good to have joined in, but I was on the late shift today. So I set off to work; still sulking somewhat. I've had the weekend to reflect on last week's interview. I *wouldn't* want to be in a manager's position again. But *I* want to make that decision, not have it made for me.

As I drove to work Women's Hour was on the radio. There was an interview with some bright up-coming young musician (I didn't catch her name). She is supposedly featuring live with Stevie Wonder among other famous musicians, and apparently Women's Hour was lucky to have her on the radio. She sounded quite interesting when interviewed. As a special treat for the listeners she then sang a couple of songs.
Oh dear....
She really didn't sing at all. It was best described as a howl. It was truly dreadful. To think people are paying good money to listen to her...

I got a bit of shopping in Morrisons. I noticed that armpit-squirt has dropped in price. Eighty-four pence today; the same brand was one pound fifty the other week. And as I was in the area I stopped off in Go Outdoors where I got a new picnic blanket and a seat belt for my dog. He won't like it.
The nice lady in Go Outdoors told me my Go Outdoors bargain card was about to expire; have I really had that thing for a year? It was somewhat ironic that as I arrived at work my phone beeped with an email from Go Outdoors with a promotional code offering me an extra ten per cent off of any purchase I might make today.

Once at work I did that which I couldn't avoid, and then came home as promptly as I could for my usual Monday fix of Game of Thrones and Gotham. Gotham was excellent; I can't reallyu comment on Game of Thrones; I slept through much of it...