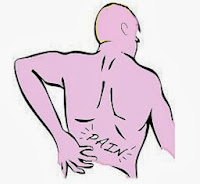 I lay awake for much of the night llistening for a storm which never really came. We had some heavy rain, but at no point did we have "hurricane Holy Sh*t" which had been both forecast and promised.
I eventually staggered out of my pit shortly after 7am, and over brekkie had a look-see what was going on in the world via Facebook. There wasn't much happening really. I then spent a few minutes trying to get up from the sofa. Overnight my back had got really painful.
Probably as a result of pushing a car out of a ditch three days ago when it was still bad from carrying a fridge about five days ago.

I took "Furry Face TM" out for a walk. This morning seemed really quiet. Usually 8.30am on a Friday morning has people busying about all over the placce. Today we hardly saw anyone. Mind you"Furry Face TM" had a woof at all of those that we did see. There was a dodgy episode when he lunged at another dog, slipped on wet fallen leaves, skidded and turned a full somersault in mid air. He crashed down very heavily on his side. I was rather worried; for a few minutes after that he seemed very subdued and his tail was down. But no serious harm seems to have been done.
We walked into Stanhope to collect my car; we'd left it with Lisa and Earle overnight. I had planned to blag some more brekkie from them, but seeing no lights on I wrongly assumed they were asleep and so didn't knock. It turned out that they were up; I should have knocked.

Once home er indoors TM" set off shopping. I put the (hopefully) fininshing touches to a year's homework and then spent two hours struggling with Feigenbaum's constants. If any of my loyal readers are feeling particularly clever maybe they could have a look at this puzzle.
After two hours I gave up and played Candy Crush until er indoors TM" came home with cakes. With cakes scoffed we went shopping for a bit. We didn't get as much done as I would have liked; my back hurt too much. Getting in and out of the car took serious effort, and walking with any speed just wasn't going to happen.

I then made a phone call or two to send my apologies to the astro club's meeting plaanned for this evening. My back had become so painful I actually felt physically sick. I would have been no company at astro club, so instead we had a quiet night in. Pickles and baked leeks and ham went down very nicely as we watched the Christmas "Downton Abbey" and Wallace and Gromit and all sorts of stuff recorded onto the SkyPlus box. It would have been a really good evening if only I had been able to move about...