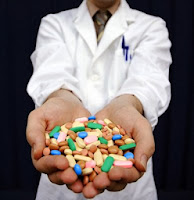 I looked at the clock at 1.45am this morning, but dozed off again. I then woke shortly after 5am which was rather good really. Over brekkie I watched "Family Guy" again - this time their take on the third (sixth) Star Wars film. If you were really knowledgeable about Star Wars and American television it would probably have been quite entertaining. I thought it was the worst of the three Star Wars/Family Guy crossovers; and the first two were rather dire. Consequently this was a rather rubbish hour spent in front of the telly.

And so to work through very heavy rain. As I drove the talk was all about the planned expansion of airports in the South East. Apparently some years ago the Prime Minister made some comment about his being opposed to any expansion of Heathrow Airport, and now he was being held to account on this comment. I can't claim to be his biggest fan, but the poor chap has a hopeless job. Like any politician, anything he says is immediately cast in stone. A politician is never allowed to change his or her mind in the eyes of the pundits.
What a silly line to take.
I change my mind all the time.

The radio also had news about vitamin supplements. Apparently a third of the UK population are taking them event though the latest research confirms what I have said all along; they are utterly unnecessary in the vast majority of cases. Any percieved benefits are entirely due to the placebo effect. But if people have money to burn, other people will take it.

I popped into Morrison's on my way to work. Fortunately for me (and humanity at large) they had cheap deodorant. My armpits have now been squirted. I bought a tin of sweeties to take in to work, and looked at the Christmas cakes. I say "looked" - that's what I did. Looked. They were very small, and worked out at about a quid a slice. I like Christmas cake, but not that much.
I shall see what the Cheapo-Bargains shop has on offer tomorrow.

Once at work I did my bit. And scoffed some sweeties. And then came back again. As I drove this evening there was a program on the radio about Islamic fundamentalists in Africa. I've mentioned before that the BBC seems to have a very obvious anti-Muslim bias.

I made my way to Queen Street where the Tuesday gathering was in full flow. Insults bandied, tea scoffed, and I stayed awake through an episode of Merlin.... must do that more often.