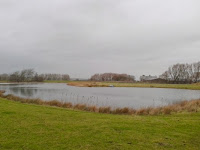 I had a good night's sleep, and consequently forgot to chase the quack about being referred to a sleep clinic. I'll phone them tomorrow.
After brekkie I put the lead on to "Furry Face TM" and took him out for a walk. I couldn't face going round the park today; we've had one or two episodes there recently. Instead we went out through Newtown and home via Frog's Island. We didn't meet any other dogs on the way, but my dog did try to pick fights with dustbin lorries, milk floats and buses.

Once home I set about solving more geo-puzzles and designing geo-souvenirs, and then Lisa messaged that her hair was washed and she was up for an outing. We had planned a serious walk around Burmarsh for today, but the weather wasn't really that good. Instead we went for a little drive out too New Romney and back via a dozen geocaches. It was a good day for drive-by caching, but we were both glad we'd decided against going for a long distance walk. It was rather cold and wet and windy.

Once home I popped round to Halfords for a tax disc holder that actually stuck to the car windscreen, and then once home I hoovered (dull), scrubbed the kitchen (duller) and ironed shirts (hyper dull). I then slept through a docu-drama about the late Frankie Howerd until er indoors TM" came home.

A quick bit of tea, then er indoors TM" went bowling. I sorted my undercrackers and watched a film. "Compliance" was a rather worrying film based on a true life story in which so many people did frankly terrible things because someone in authority told them to do so. It was a subject we touched on in the Psychology course that I did. A large proportion of people will do absolutely anything if they are told (firmly enough) to do so... You can read about it by clicking here.
It's rather worrying really...