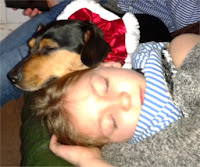 I was bored over brekkie; having been awake most of the night. An email notification came through. A new geocache had gone live just under twn miles away. So I had a choice - chase a First to Find or get even more stressed waiting for er indoors TM" to emerge from her pit. So I scraped the ice off of he car, chased the FTF and found it twenty nine minutes after the email had arrived.
I came home to find er indoors TM" was moving about, and it wasn't long before we were on our way. We took my Super Luxurious Omnidirectional Whatsamajigger (as Lacey calls the Grand-Dave-mobile) and collected "My Boy TM" and his entourage, and we set off to Hastings for the third time in three days.

Pausing only briefly to deliver a bottle of home brewed stout to my father-in-law we were soon wth my brother. Yeserday we were there, and I had a serious drinking session and a packed eventful day. Today being the driver I didn't drink a drop, but I spent most of the time fast asleep in a chair. I *really* hate that. Mind you Lacey and Fudge fell asleep too.

Little Lacey had plans for the evening, so we came home before dark, and leaving "My Boy TM" to his planned X-box-a-thon we went round to see Lisa and Earle. Once I'd been the Grim Reaper to a poorly gerbil we had a beer (or two) and watched Mrs Brown. How come I've missed this? We also watched "Life of Brian", and terrorised the pugs next door,
It would have been good to have stayed all night, but "Furry Face TM" is like a toddler; he doesn't let up until he sees his own bed. So we took a short walk home and once we were home, a dog which had been manically charging about for six hours was fast asleep within two minutes. As was I...