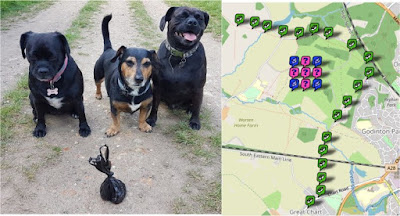 I had something of a restless night; I gave up trying to sleep, set the washing machine loose on some laundry and watched an episode of ”Trailer Park Boys: The Animated Series” which was rather good.
I then had a look at the Internet. I was hoping my new geocaches would have gone live. They hadn’t. There was an issue with one of them. When I wrote the listing I mistakenly said it was in “South West England” rather than “South East England”. You’d think that (bearing in mind the entire thing is GPS based) the software would know where it was, wouldn’t you? For all that geocaching relies on high-tech twenty-first century technology, the software it uses is years out of date.

I sent out a couple of birthday wishes through Facebook, captured a cyclops which was in the skyland and chivvied a banshee out of the treehouse (never a dull moment in the Munzee world), got the leads on to the dogs, and took them for a walk.
We went out to Great Chart where I made a start on my next geo-project…
There are plans to have a major series of geocaches along the entire length of the Greensand Way. Putting a film pot every one-tenth of a mile for the one hundred and eight miles from Ham Street (just down the road) to Haselmere (in Surrey) is a bit much for anyone to do, so the task has been divvied out. I’ve got the stretch from Hothfield to Great Chart, which is rather handy for me as I’ve already got a series of caches along three quarters of that stretch of the Greensand Way anyway. I’ve done the hard part of finding the locations and getting GPS co-ordinates already, as well as having a return loop too.
This morning we walked up to find half a dozen more locations for caches along the trail from the village to the river.

We had a good walk. Mind you I did get frustrated by the other dog walkers. They were leaving turds everywhere. One bloke’s dog was crapping, and when I offered him a black bag he turned down my offer. He was polite, but just said “no thanks mate”. When my dogs dumped I picked up their “deposits” and brandished my bag of turds at every passer-by (and ranted too) to let them know it wasn’t us crapping all over the place.

Having sussed out some locations we came home. I popped up to the corner shop to get milk and some croissants (for morning coffee) but unfortunately yet again my idiot magnet was on full power. Some silly postman was at the head of the queue. Rather  than paying, he was waving his credit card about as though trying to swat a fly with it. He was insistent that this was how a contactless card worked, and flatly refused to hold the thing anywhere near the card reader.
Oh how I and everyone else in the queue all laughed.

I scoffed my croissant with a cuppa, and started on the geo-admin for my new cache series. By half past one I had the first bit of the process done, and I was going cross-eyed, so I stopped and did some ironing.
As I ironed I watched a documentary about the life of John Le Mesurier. It was rather interesting, but it featured several interviews with Michael Palin. Every time he spoke there was a *huge* poster behind him advertising his diaries. I thought Mr Palin was above that sort of thing.

With ironing ironed I cracked on with the geo-admin. There’s still a couple of hours (or more)’s work to be done, but the end is in sight. I could have this series live in a week *if* work didn’t get in the way.
"er indoors TM" boiled up a very good curry which we scoffed whilst watching “Bake Off: the Professionals” and an episode of “What We Do In the Shadows”.

These two rostered days off have been rather tiring…