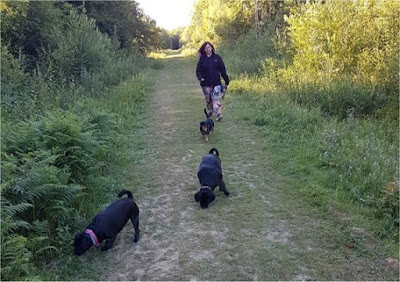 I slept well. For some inexplicable reason I woke feeling that I really had to put laundry into the washing machine, and as the thing started churning so I felt a strange sense of completion and relief. What was that all about?
Over a bowl of granola I watched the last episode of "Trailer Park Boys: The Animated Series” before sparking up the Internet. Not much had happened overnight really, but I had another email from geocaching HQ in which they assured me that they had sorted out their squabbles with my old email provider.
I played an on-line jigsaw puzzle whilst I waited for the washing machine to finish, hung the washing out and then got ready for work.

As I drove to work the pundits on the radio were talking about how many people have got into serious debt through on-line gambling during the lock-down. Some woman was on the radio saying how she'd blown thirty thousand pounds on the on-line slot machines. Having lost a *lot* of money she'd then thrown away far more trying to gamble it back again and has now exhausted all her cash and all avenues of credit.
There was an interview with some other woman who was (supposedly) a big cheese in the regulation of on-line gambling. Whilst she sympathised for all those people who now can't afford to eat because they have blown every penny on the horses, she felt that the public had to realise that the gambling industry is vital to finance the sport that the nation loves. As this woman wittered on, it was revealed that through sponsoring big sporting events and getting their names on the telly, the names of the big on-line bookmakers are now more familiar to children than the names of many high-street retailers.
Yet again I found myself getting rather cross. I've often ranted that sport is something that is *done*, not *watched*, but it would seem that I was wrong on both of those options. Sport is (apparently) primarily something to be gambled on.
I can't help but think that the regulation of gambling should be seriously increased, and if greedy bookmakers go out of business, then that is a shame. And if watching sport is such a big thing (which for many it clearly is), why not do away with the on-line gambling sponsorship and have sporting events as "pay per view". After all, that is what the TV companies have done with Star Trek.

I got to work and deployed some mysteries (it's a Munzee thing) then got on with work. Half-way through the morning I was called into the boss's office. Apparently I have been identified as being more at risk from coronavirus than many of my colleagues as I am a white middle-aged porker.
It was shortly after this when we peered out of the window watching the antics of an amorous pair of young ladies who were laying on the grass outside. Far from socially distancing, they were enjoying squeezing each other's spots.
And they say romance is dead...

My phone beeped. The official app of the Met Office had declared a Yellow Alert, warning me of expected serious amounts of rain in the next few hours. The BBC's weather app said there was (at worst) a six per cent chance of rain today. One of them has been making it up.

By the time the evening came I had decided that the BBC’s app was the right one; the evening was glorious. We did “boot dogs” and drove down to Orlestone woods where we had a rather good walk and met no ne at all. We just walked and enjoyed the peace and quiet.

"er indoors TM" boiled up a decent plate of gammon and chips which we scoffed whilst watching “Bake Off: The Professionals”. I wish I could cook good enough to end up on a show like that…