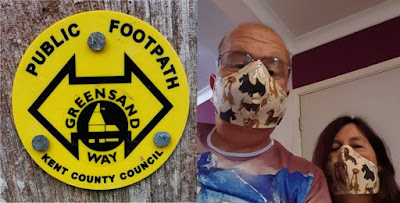 I slept reasonably well despite a nightmare in which I had rented out laboratory space at work to the guide dogs people (so that they could have somewhere to train their dogs) and was spending all my time gathering up errant dog turds before the bosses found out what I had done. What was that all about?

I made some toast, and then achieved far more in five minutes than I did in two hours last night. Yesterday I realised I hadn’t received a single email from geocaching dot com for a few days. Bearing in mind that people had been finding the caches I’d hidden and that I’d had a geo-series of fifty caches go live yesterday I should have had between three and four hundred emails. I hadn’t had one. It is very difficult to do a hobby which (for the large part) relies on email when your email doesn’t work. Somehow my email provider was blocking anything from geocaching dot com. No one else with the same email provider was having that problem, and bearing in mind that I pay Microsoft for Office and I get email with that I thought I might swap to that email account.
I spent a couple of hours last night getting really angry being unable to set up rules in Outlook. The screens on my laptop bore no relation at all to the pictures in the “how to” guides.
This morning it occurred to me that I might log in using a browser rather than the email app, and I had the rules working in minutes.

I had a look at the Internet and saw that others were also having issues with geo-emails. But other than that there wasn’t a lot going on in cyberspace. One of the emails I did receive was from Amazon recommending I bought the very e-book I am reading at the moment (that I bought from them last week).
I sent out birthday wishes and took the dogs for a walk.

We drove out to Great Chart and walked from the cricket ground out to the river and back. This might well become one of our “standard” walks; there aren’t that many “normal people” in the way, the dogs can run off the leads, and the other dog walkers there understand what dogs are like.
We had a fairly good walk; it was a shame that Fudge had to try to play “dog piggy back” on several dogs three times his size; you would never believe that with his spondylosis his spine is effectively fused together at his hips.
Treacle and Pogo were good; they were playing their usual chasing-fighting games, and whenever Fudge tried to join in they would slow down so he could keep up.
We walked up to the river, we had a spuddle and came home again.

Once home I cleared the garden of dog turds (a never-ending job), and spent a little while fiddling with my latest geo-project; nineteen geocaches along a stretch of the Greensand Way and another nine on a return loop. This morning I ordered the cache containers I will need and some placcie bags for the paper logs (that was another twenty quid…).
The doorbell rang. Our face masks had arrived. I’ve been a tad sceptical about the whole “PPE in public” thing but seeing how it is to be compulsory from next week I’ve taken the line that if you can’t beat them, join them.

I went to Sainsbury's to get petrol. I must admit I wasn't impressed when I went to pay. The woman behind the counter pointed at the barcode scanner, told me (rather abruptly) to scan the sandwich I'd just bought, demanded to know what pump I'd filled up at, and told me I could pay using a contactless card. She tried to make some comment about how this new scheme (in which I did her job) was so much easier for everyone. I asked her if she'd been to B&Q recently. She hadn't. I suggested she did; for the large part checkout staff there are a thing of the past with most people using the self-service tills. I also suggested she started looking for a new job before the inevitable happened. She said they would never get rid of the checkout staff... I pointed out that the last time I got petrol from that branch of Sainsbury's there were three staff behind the counter. Today there was only one (and a long queue).
Clearly this had never occurred to her.

As I left the petrol station the "range" readout on my car said I could go five hundred and twenty-five miles before needing to re-fuel. As I'd done quite a bit of motorway driving recently I re-set it to see if cross-country driving was more economical. As I drove out to Pembury I watched the "range" readout going up and up (rather than down and down).  Having left Ashford with five hundred and twenty-five miles of petrol in the car, I arrived at Pembury with five hundred and seventy-four miles worth of the stuff.

And again, as is so often the case when on the late shift, the best part of the day was over and done with by mid-day.