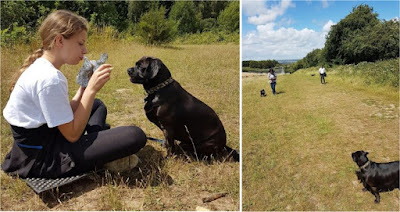 Treacle woke me with a woofing fit at half past one, and once I am woken I don’t really get back to sleep again. I saw every hour of the night, and gave up trying to sleep at half past six.
I made some toast and peered into the Internet. It would seem I hadn’t missed much overnight. Some people had walked round Kings Wood looking for the geocaches I’d hidden there, found the lot and had said nice things about them.
With nothing else happening on-line I got ready to take the dogs out. It would have been nice to do the family thing today but Fudge and Pogo just try to play “doggy piggy back” on Sid all the time, and "Stormageddon - Bringer of Destruction TM" won’t leave Pogo alone.

We drove round to Sainsbury’s to get petrol; their petrol station was closed, as was the one on the ring road. I went to the petrol station in Hythe Road where my idiot magnet worked again. Some chap was wanting to cash in a scratch card or something. The chap behind the counter was having to tell him each word to write onto the requisite form, and how to spell each word. After ten minutes the chap behind the counter told him to get out of the way so that he could deal with the customers, and the idiot trying to write got rather stressed with trying to lean on a bottle of milk as something on which to rest his bit of paper.

We drove out to Linton Church where we met Karl, Tracey and Charlotte, and we set off on a rather good walk which effectively orbited the village of Coxheath. With only a little of the walk on lanes (and those lanes were rather quiet), and no cattle at all, the dogs were able to be off of their leads for a large part of the day. The owner of one house had been kind enough to put out a bowl of water for the dogs, and with only one real exception, the dogs were as good as gold. The exception being when another dog came past at picnic time; heaven help any other dog who goes near my dogs’ rice.
Yes – rice.
The dogs love rice; Karl had made some for them, and they loved it. They had their rice, we had some bottles of ale; a day in the sunshine… you can’t beat it. As we walked we found that Pogo likes playing “Fetch”. Treacle likes a stick, but in the past Fudge has never played “Fetch”; he just rips up tennis balls. But Pogo was chasing after kicked apples and fetching them back to be kicked again. We shall play this more often.

Not long after we started walking a young couple overtook us. They smiled politely and walked on in front, then rummaged in the very hedge we had targeted for a rummage. We got chatting; they too were devotees of the noble art of looking for film pots under rocks. We walked for quite a way with them; they’d never met any other geocachers. It was good to meet new friends; it would be nice to run into them again.

Geocache-wise this was an excellent walk, and with the added bonus of some lab caches too.
Good co-ordinates given with helpful hints made for a good time. Far better than last week’s walk round Edenbridge which was rather hard work. Perhaps we walked a little further than we needed to today by parking at the church, but the path through the orchards was rather pretty.
I took a few photos as we walked.

Once home the dogs were soon fast asleep; had it been too hot for them today? I don’t think so really. They had plenty of water, and seemed happy the entire way round. As the dogs snored so I posted photos to Facebook and did the on-line geo-stuff that people do until "er indoors TM" came back from taking "Daddy’s Little Angel TM" and "Stormageddon - Bringer of Destruction TM" home.

"er indoors TM" boiled up pizza for dinner which we scoffed whilst watching a bit of telly. Possibly I ate too much; possibly I should have worn a hat today. But either way an early night might be a plan…