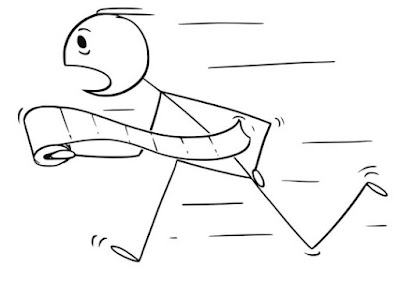 As I scoffed a bowl of granola I watched an episode of “Trailer Park Boys: The Animated Series”. In today’s episode, once Ricky had had his nasty attacked by a seagull and lost a fight with his brain, our heroes joined a cult by mistake.

As I checked out Facebook I read something profoundly depressing. Yesterday I wore a brightly coloured shirt for a socially distanced afternoon in the garden with family. I’ve been wearing these sorts of shirts at summer barbies for as long as I can remember. But it would seem I have inadvertently dropped a clanger. In amongst all the “Black Lives Matter” furore, it turns out that wearing a Hawaiian shirt (like I very regularly do) is now widely recognised as a sign of the white supremacy movement.
Do I just ignore this stupidity or do I throw all my shirts in the bin?

I couldn't help but notice just how busy the motorway was this morning. The traffic was back to how it used to be before the lock-down. As I narrowly avoided being run off the roads (time and time again) the pundits on the radio were talking about how the shops are re-opening today. To stop viral spreading, the idea is that when shopping the punters look at what they might buy rather than picking it up and mauling it about. However this radical change is expected to be rather difficult for the shop staff to implement. I was reminded of taking cub scouts into shops years ago when I would shout at them that they must look with their eyes and not with their hands. It was through ignoring my instructions that most of the children managed to break their potential purchases before they got to the till; breaking them after they had paid for it and had left the shops was always an unachievable ambition.

I got to the work's car park, deployed a Munzee (as one does), and got on with a rather busy day. Thalassaemia, haemoglobin C and a dysfibrinogenaemia... Never a dull moment. Mind you I did spend an inordinate amount of time nipping to "Trap Two" today. Yesterday as the first fruit of my loin slaved over the barbecue I jokingly commented on what a gastric lottery barbecues can be. I suggested that to take the element of chance out of it, he might cook the meat in the oven for those who just wanted their dinner, and that he might provide a bucket of stagnant ditch-water for those who wanted dire-rear. Whilst what I scoffed yesterday was rather good, in retrospect maybe I should have gone for the "oven" option?

Once home we ran the dogs quickly round the roads, then "er indoors TM" went to Aldi for shopping. I set the washing machine going on some shirts and had a look at some geo-puzzles until "er indoors TM" arrived with dinner.
I feel rather worn out – too much sun and too much beer yesterday has taken its toll…