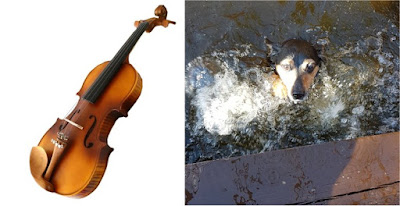 I had an early night, and was sleeping like a log when Sid sounded as though he was trying to wake the dead when he walked down the stairs at half past one. After we’d sorted him out I dozed fitfully. I’d just got back to sleep when Treacle had a barking fit at four o’clock.

Over a bowl of granola I watched an episode of “F is for Family” then had a look at the Internet. There were a few photos of people enjoying yesterday’s sunshine, but not many. Mind you I did have over two hundred more “Found It” logs and fourteen favourite points on my Kings Wood geocaches; I’m seeing that as something of a result.
I quickly captured some bouncers (it’s a Munzee thing) and got ready for work.

As I drove to work the pundits on the radio were interviewing some twelve-year-old child who is the world record holder in playing the violin. I found myself looking back to my schooldays when I too played a violin. I can remember being particularly crap at it; so much so that my mother banned me from practicing the thing at home, and so I got into a vicious circle of getting further and further behind everyone else in violin class before finally packing it all in. Looking back this was rather silly of my mum as she'd paid good money for that violin. I wonder whatever happened to it; have I left it too late to become a world record violiner?
Mind you the novelty of the saxophone soon wore off too. Drum and bugle were never my forte in the Boys Brigade (although I did clang a mean set of cymbals) Perhaps music isn't my thing?
This was followed on the radio by the "Thought For The Day" bit. I have no idea what today's platitudes were all about; they were so vacuous I'd forgotten about what she'd said even as she was saying it.

Pausing only briefly to deploy a Munzee I went into work where we've all been issued face masks to wear (now that the hospital is opening more to the general public). After the initial novelty of the things wore off, we all felt them to be something of a nuisance. It was good to drive home with the thing gone and without my glasses steaming up.

I came home to an empty house… empty of humans that is. "er indoors TM" was taking "Daddy’s Little Angel TM" home. I fed the pond fish and we had the usual over-excitement from the dogs; they *love* fish feeding time as they try to snaffle the fish food. I left them watching the fish intently and went to harvest the dog dung (they’d done a *lot* today). Just as I was gathering up a rather gigantic turd so I heard a rather loud splash. Fudge had fallen in the pond. Pogo fell in last week, and I expect Treacle will be in it next week.

"er indoors TM" came home and boiled up some pizza and garlic bread which we scoffed whilst watching the telly. It’s not a bad thing to watch…