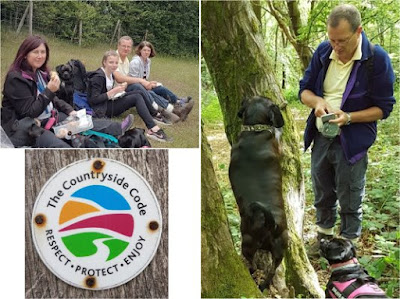 As I opened the curtains at quarter to seven this morning I saw some chap pushing a child in a push-chair up the road. As he went he was swigging from a can of lager. I like a drop myself, but I did think that he was being a bit keen.
I watched an episode of “Trailer Park Boys” then sparked up my lap-top to see what I’d missed overnight. As is so often the case I hadn’t missed much. All talk of coronageddon on social media was now very obviously completely out the window and very much yesterday’s news as everyone is now swarming together in protest marches and campaigning for racial equality. An admirable sentiment; such a shame that everyone has to swarm together in mobs to express it. These protest marches amaze me; I know of people who go on them not out of any heart-felt feelings or convictions, but because it is something of an adventure to do.
With no emails at all I kicked "er indoors TM" and the dogs out of their pits and we got read for the off.

There was a minor delay before we could start driving. The dogs would not settle in the car; eventually "er indoors TM" located the remains of some chips that "Stormageddon - Bringer of Destruction TM" had managed to drop under the driver’s seat.
We set off up the motorway listening to Steve on Radio Ashford for as far as the signal held out (to about Lenham), and it wasn’t long before we were at where we’d arranged to meet. It took a little longer to find somewhere to park though; seemingly everyone was out in force today.

We met Karl, Tracey and Charlotte and set off on a little walk. About six months ago they put out a series of geocaches in the nearby woods, and today a maintenance check was in order, so we thought we’d come along for the walk. There used to be a series of caches in those woods which I walked on 22 May 2013. Over the years pretty much everyone who hunts Tupperware had found those ones, and when the opportunity arose, our pals archived them and replaced them.
I wish more people would do that with these series of geo-walks.
When the old series was finally archived it was being found once a month or so. When a series of caches gets that few visits it is a sign that everyone who is active in the hobby has done it, and it is time to clear the map to make space for new. The new series has had more finds in the last six months than the old series had in its last two years.
I’ve got three larger series of geocaches active. I fully intend to replace two of them in the next few months and the third within the year.

There were a *lot* of people out walking today; we met far more people than we usually do when out. We met a few other dogs and Pogo was well-behaved. He came when called when we met horses and bike-riders. He totally ignored the donkeys. It was a shame he had to bark at the cows, but you can’t have everything.
As we went we met “William” -  a fourteen year old wire-haired dachshund who (to the disgust of his mummy) seemed to be quite happy eating the horse poo that he found on the ground. We also saw a rather unmoral young lady airing her “puppies” (to the delight of her paramour). She put her “puppies” away rather quickly when she saw us coming(!)
We had a good walk though. Monkdown woods had no stiles or fields of animals to traverse. The dogs ran off their leads for most of the way. And we had a very good picnic lunch at the bottom of a large meadow. As we scoffed (and downed a couple of pints) we chatted with a couple of “normal people” who were photographing flowers. Those little pink things were orchids…? One lives and learns; I always thought orchids were big things. We chuckled as the cyclist came down the hill announcing their brakes didn’t work. Everyone was enjoying their own way to spend the day.
I took a few photos as we walked.

Despite the BBC’s weather app assuring us there was only a one per cent chance of rain we got caught in a downpour, but it quickly passed. We didn’t get *that* wet. Something odd has happened to weather forecasting over the last couple of years; it has certainly got a lot less reliable.

We got back to the cars; we said our goodbyes, and I slept most of the way home.
Once home I strained my brain to the limit (and beyond) on a geo-puzzle. If any of my loyal readers fancy a challenge, click here and see how well you do. Mind you I did have just the teensiest bit of help.

"er indoors TM" boiled up a rather good bit of dinner which we devoured whilst watching Joe Lycett (the twenty-first century’s version of Esther Rantzen) before tuning in to the Sunday night Zoom meeting.

I think I caught the sun today…