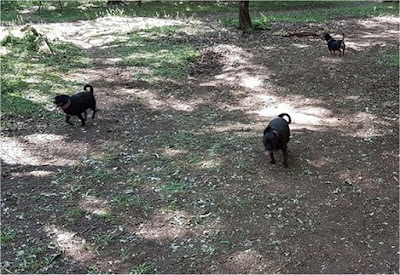 I’ve found that sleeping *on* the duvet rather than under it gives me a far better night’s sleep. It worked again last night.
Over brekkie I peered into the internet. Not much had happened really. And there wasn’t anything in my in-box either. A new geocache had gone live which wasn’t a million miles from my route to work. I’ve I’d not been on a late shift I might have chased the First to Find. But I wasn’t, and so I didn’t. Instead I waited for "er indoors TM" to get ready, and we had a look for that cache on the way to a dog walk in the Warren and missed being first to find by twenty minutes. I must admit I was a tad miffed. Not so much at being beaten to the first to find as being beaten by someone who has now claimed over one thousand eight hundred FTFs but has only hidden three caches (and none of those in the last seven years).

Narrowly avoiding a collision with another car (the driver of which was paying no attention to the world around him) we parked up and took the dogs round the Warren. It was a relatively good walk; there was only one “Pogo episode”. There were quite a few squirrels about the place; two of which were “doing the dirty deed” whilst clinging to the side of a tree. Treacle soon put a stop to that shenanigans; I’mglad someone took a moral stance.

We came home, I set the washing machine going, and then carried on with geo-preparations. I was intending to make up some containers, but it would seem that I’d run out of tape to disguise my film pots, so I went on-line to order some more.
I packaged up the SD card from my CPAP machine to send to the local hospital. They should have been reviewing the thing on an annual basis… this will be the first time they’ve had a look in years.
And after an hour and a half the washing machine finished it’s one-hour cycle. Perhaps it is time to get a new one? I hung the washing out – might as well make the most of the bright weather.

I set off to work. As I drove there was some frankly insulting thing on the radio about how the term "everyman" is perfectly acceptable to refer to any generic male person who may be portrayed in literature, on radio or on screen. But the female equivalent "everywoman" is utterly unacceptable because it is demeaning to lump all women together. The shrieking harridan presenting this on the radio went on to say that the concept of an "everywoman" was devised by a middle-aged white man, and so was somehow my fault.
Even though it isn't.
This isn't entirely unlike the "Black Lives Matter" campaign which is gaining momentum. This afternoon during a break I read that anyone who counters the slogan "Black Lives Matter" with "All Lives Matter" is part of the problem.
I'm sorry but that whilst equal rights for all is certainly something I support wholeheartedly, the inequalities in all societies are something that have been going on for hundreds of years. Why am I being made to feel responsible for something over which I have no control whatsoever?
Perhaps working where I do I have a more cosmopolitan outlook on the world? None of my managers are white caucasian males; I don't see that they should be. That doesn't bother me at all. In my world racial and gender equality just isn't an issue.
So why am I being branded racist and sexist purely because I'm a white middle-aged man?