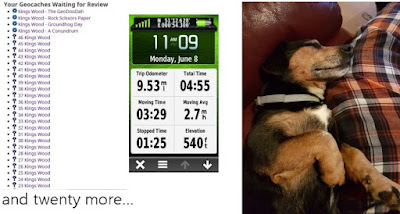 I woke rather early this morning, but rather that messing about (like I usually do) I turned this to my advantage. I made some toast and scoffed it whilst watching an episode of “Trailer Park Boys: The Animated Series” (in which our heroes tried to get rich on Dragon’s Den and came off worst with a glitterbomb).
And then rather than sparking up my lap-top I got on with my plans for the day.

Having (some time ago) planned a new geo-series to go out in Kings Wood, the whole thing went on hold with the lock-down. But now that lock-down is easing I thought I might finish that little project before embarking on the next two geo-schemes I have in mind.
I drove up to Kings Wood. As I drove the pundits on the radio were talking about the “Black Lives Matter” protest marches that took place over the weekend. The BBC said the marches passed off peacefully. Other news sources mentioned twenty-seven police officers being injured (and a police horse had a brick thrown at him). A statue of Winston Churchill was defaced, and a statue of some chap in Bristol (who made money from the slave trade) got hoiked in a river. If that is “peacefully” …!
From a purely personal point of view, all these protests seem to have done in my world is to stir up bad feeling where there never used to be any.

I got to Kings Wood and got on with what I wanted to do. With fifty new geocaches planned I had to actually hide the pots today. I did have a series of geocaches up there before so I was able to re-use thirty of the old pots.
I walked round, hid a film pot under a rock walked on a bit, hid another… and so on. It was a shame the weather was against me; it was rather overcast and drizzly. But I didn’t get *that* wet really, and Kings Wood is a good place to walk. You can go for miles without seeing anyone. In fact I didn’t see anyone until the six-miles point (and then I saw three different people within a couple of hundred yards).
I started walking shortly after six o’clock; I got back to my car just after eleven o’clock having walked nine and a half miles.

I came home and spent quite a while sorting the last bits of the geo-admin for the new cache series, then emailed it all to the geo-feds for their consideration, then we took the dogs out for a little walk. They have got used to mid-day being walk time.
We came home via the corner shop for a cake, and I slept in front of my lap-top for most of the afternoon.

"er indoors TM" boiled up a very good bit of dinner which we scoffed whilst watching “Celebrity Gogglebox” which featured one of the (quite frankly) most ridiculous haircuts I have ever seen, and a couple of episodes of “What We Do In The Shadows”; an odd show, but I quite like it…

I wonder what the geo-feds have made of what I did earlier?