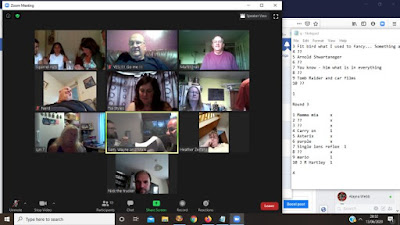 As I scoffed a bowl of granola I watched an episode of “Trailer Park Boys: The Animated Series” in which Ricky was having an argument with his brain, before finally outsmarting it.
I then sparked up my lap-top. It went berserk as (literally) hundreds of mails came flying in. All of those emails that I had expected to receive on Wednesday but never came. There was also one from geocaching dot com HQ which told me that my email provider had been blocking emails from them. I sent a snotty email to GMX asking why they had done this, and asked what assurances they could give me that they wouldn’t randomly block anything else that might be important.

Nothing much had happened overnight on Facebook so I sent out some birthday wishes and got ready for work.
As I drove to work there was an article on the radio about a blind chap who has taken to walking the country's long-distance footpaths. That's quite an undertaking for a blind person. I have enough trouble getting three dogs along the Greensand Way - he was saying he walks these paths with his guide dog. I'd be fascinated to see how he manages.

There was also quite a bit of talk on the radio about the current fad of pulling down statues of people who seem to be offensive to those with no understanding of history. Quite a few of London's statues have been fenced off today so that the protesters can't deface them.  As well as endless protesters marching in London this afternoon there are apparently all sorts of other groups going to London as well. Some are going to fight with the protesters. Some are going to fight with those who want to fight with the protesters (I was asked to join one of these groups). Some are going to guard the statues and fight with anyone who goes near (I was asked to join one of these as well)
There was an interview with a leading policeman today. He said that whilst people can protest as much as they like, they must do so along the route which has been marked out for them, no one should fight with anyone, and they must all go home at five o'clock. Back in the day I was all for civil liberties... however more and more I can't help but feel that everyone has "rights" but no one has "responsibilities". If any riots kick off the coppers should sort it out. Give 'em a slap.

There was also talk of how the BBC has un-banned the episode of "Fawlty Towers" in which Basil Fawlty was supposedly so offensive to Germany. The BBC would seem to have listened to common sense rather than the pathetic whinging of those who are going through the archives looking for things about which they might take offence.
Personally I feel we should bring back "It Ain't Half Hot, Mum", "The Black and White Minstrels" and Alf Garnett. Not to giv offence, but as a reminder of just how things were in the past. We achieve nothing positive by censoring what has happened, and history has shown (time and again) that those who don't learn from the mistakes of the past just go on to make them again.

I got to work where a colleague was yawning a lot. So much so that she set me off. She was pleased about that - I'd passed the test. She's taken to yawning at people, and if they don't yawn back then they are probably a psychopath. It says so on the internet so it must be true.

At tea break I had a message from Facebook. Last year "Dana Cleveland" sent me a friend request as well as an invite to join her rather unmoral Whatsapp group. I posted a picture of her on my Facebook feed, and reported her porn-mongering to the Facebook feds. Last year they told me that her porn-mongering didn't breach their community standards, but today they told me that my posting a picture of her did.
Go figure...

The weather had been glorious as I’d been at work. The moment I got home so the heavens opened. But regardless of the rain I ran out the hose pipe – the garden pond needed topping up.
We had a very good bit of dinner, then tuned in to the Saturday Zoom quiz. "er indoors TM" was running it today… I came second to last…