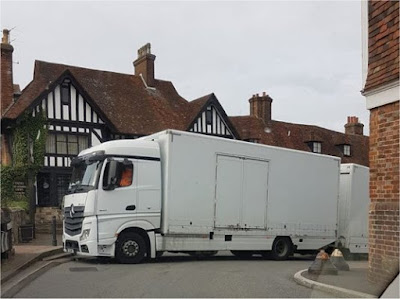 I scoffed a bowl of granola whilst I watched the first episode of the new season of “F is for Family” which wasn’t that funny really. There is only so much comedy to be milked from a caricature, and I think the well might have run dry. But I shall watch another episode or two before giving up.
I had a quick look at the Internet. Pretty much nothing at all had happened on Facebook, but I had an email or two. Two hundred and eighty in fact; people had been finding the new geo-series I’d put out in Kings Wood.

As I drove to work the pundits on the radio were talking about how footballer Marcus Rashford managed to persuade the government to provide free meals for children during the school holidays. That's good of him.
There was also talk of how fake news on Facebook is being banned as it has influenced government decisions in the past and hopefully the ban will prevent this from happening again.
I felt it was odd how a footballer is lauded but social media is derided when both are unelected and are influencing a democratically elected government. And I felt it even more odd that no one on the radio had made the connection.

I spent ten minutes in a traffic jam at Goudhurst this morning watching a rather huge lorry (with an equally huge trailer) trying to get round a tight corner which was far too small for it to actually be able to get round. I found this particularly annoying because the idiot driver had driven past several signs warning him that his lorry was too big to get through Goudhurst, but still he had kept going. Like so many others do.
When I eventually got past the lorry I drove past a very long queue of traffic in which were two other equally huge lorries which weren't going to get round that corner either.

I needed some shopping, but being utterly fed up with the (frankly appalling) attitude of the staff in Pembury's Tesco, I went to Asda. I'd looked at the map and seen there was a branch of Asda about as far from work as Tesco was, albeit in the other direction.
On the one hand Asda has a far better selection of beers and wines, and they sell a lot more other stuff too. On the other hand the staff there seem equally utterly disinterested.
Oh well... I got my bogroll, a decent bottle of plonk and something with which to unblock the plughole, so it wasn't a wasted journey. It was just a shame that their trousers department doesn't cater to the more rotund physique.

I got to work and won (or should that be lost) a "who's the fattest" contest with a colleague who is six months pregnant. We also had a minor altercation with "malfunctioning apparatus", which caused a chuckle or two.

"er indoors TM" is boiling up some scran, I’ve uncorked the plonk… here we go. I wonder what’s on telly?