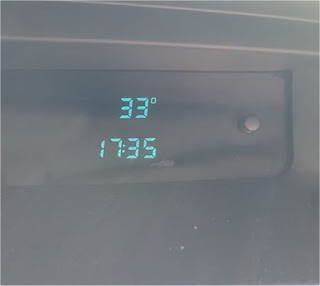 I slept like a log - night shifts are good for that. Apart from having to shove Treacle over at some point in the small hours I was out for eight hours. Result!

Over a bowl of granola I watched an episode of "F is for Family"  which is becoming more of a soap-opera than a comedy, then (taking great care to let three sleeping dogs lie) I got myself ready for work.
Narrowly avoiding being run off the road by a van from RSR Drainage of Bethersden I again found myself wondering why people don't take a little more care when driving their company vans about. If these idiots can't be seen to drive safely down a road...

As I drove to work the pundits on the radio were talking about how the post-Brexit trade deal with America is about to go down the pan. It transpires that the British food industry has standards, and it was implied that the American food industry does not. Chlorinated chicken was the least of the worries of the people who were talking of acceptable levels of maggots, mice and other such vermin in the food they are looking to import. I almost laughed out loud when some pompous windbag claimed that no one said this would happen when he voted for Brexit.

I stopped off in Pembury to deploy a Munzee (as one does). One of the houses nearby had the window open (it was a rather warm morning), and I faffed around for quite a while as I listened to the family drama which was being broadcast from those open windows. There is never anything as interesting as other people's business.

I got to work; I did my bit. At tea break I finished my e-book with something of a sense of disappointment. It was the fourth in a series. The first three had been rather good, but this last one didn't live up to my expectations. I must admit I was put off by the factually inaccurate medical science in the early part, but I can't help but feel that the book's proof readers have let it down. I spotted several spelling and grammatical mistakes. The world described in this fourth book wasn't consistent with that described in the previous three, and with characters who are double-hard one minute and pussies the next, the book could have been so much better.  Still, e-books are far cheaper than physical ones.
I also heard that Apple TV are in the throes of making a TV series based on Isaac Asimov's "Foundation" series. Everyone has heard of it; not that many people have actually read it. The three books in Asimov's (original) series were comprised of what was actually eight short stories written for magazines in the 1940s; the eight short stories telling a tale over some three hundred years. I'm not sure if that will translate to telly very well, but I'm hoping for the best. Annoyingly it is going to be on Apple TV; that's another TV subscription I shall have to take up.

With work done I went back to my car, opened the doors and waited for a few minutes for it to cool down; I’d worked in the air-conditioned lab all afternoon. Outside was rather warm.
I came home via Matalan where the “special people” were out in full force. One pair of half-wits made me chuckle. Both were wearing rubber gloves which were far too big for them and were full of holes. Mother was constantly shrieking at the child not to touch anything for fear of death. The child was constantly shrieking that it was not touching anything despite clearly mauling everything within reach, and chewing on at least half of that which it had mauled.

I got myself a couple of shirts and a new pair of slippers… and some t shirts… and socks… and some trousers whilst I was at it… and a set of sexy jim-jams. My NHS bargain voucher gave me a tenner off, but I still spent over ninety quid. It was a shame that the chap on the till demanded I used the self-service thingy. Don’t they realise that’s how they end up out of a job?

I came home and fought to get the door open; it had swollen in the heat. Once in I contended with canine excitement as "er indoors TM" was engrossed in the weekly in-line geo-meet.

We had a very good bit of scoff whilst watching a couple of episodes of “What We Do in The Shadows” then "er indoors TM" took the dogs out. I’m thinking about another early night…