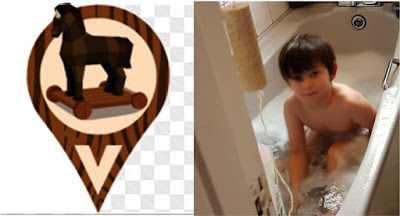 I slept well. Over brekkie I peered into the depths of the Internet and saw a question had been asked on the “Geocaching in Kent” page. I answered, and was immediately told that I was wrong. A short but civil correspondence followed with me eventually giving up. Effectively I said “my experience was X” to which someone else said “that was impossible”. Short of asking if he was calling me a liar there wasn’t really anywhere further to go. Amazingly the chap who was looking for a squabble lives five hundred miles away in Lanarkshire. What is he doing posting on a Kent-based “local group for local people” Facebook page?
I also saw the update from my old church… back in the day I was rather religious, but despite “having seen the darkness” I still keep up to date with what the old gang are doing. The church itself closed down four years ago but the congregation now meet in a community hall. There are not many people left (about twenty), but they seem to keep going. Reading this morning’s little missive made me think. Was I really that much of a religious nut back in the day? Today’s update gave thanks to God for everything that was brill in the world, and blamed themselves for all that was crappy. It really was along the lines of “Well done God for putting so much money in the collection plate, and I’m sorry I made it rain this morning”.

I saw that our Munzee clan had achieved our monthly goal. Nowhere near as much as other clans, but in the six months that I’ve been doing the Munzee clan thing I think I’ve found a level that (for me) allows the thing to keep being fun without turning it into a chore. I saw I’d been awarded a Trojan Unicorn which had been immediately deployed for me in the vicinity of San Antonio International Airport.

With "er indoors TM" still in pyjamas I took the dogs down to Orlestone Woods for a walk. We did our usual circuit of the wood; as we went we met a few other dog walkers. And as is the case with dog owners who *do* know the first thing about dogs we got on famously. A little woofing, a little bum-sniffing, and some playing.

Once home I had a cuppa, then with "er indoors TM" off to collect "Daddy’s Little Angel TM" and "Stormageddon - Bringer of Destruction TM" I spent a little while straining my brain on geo-puzzles. I managed three all on my own but needed a little hint for the fourth, and then fell asleep.
I slept for a couple of hours.

Once awake I spent a little while pootling in the garden until "er indoors TM" arrived with "Daddy’s Little Angel TM" and "Stormageddon - Bringer of Destruction TM". SBOD helped me with some of the weeding, then we went and played Lego for a while before taking the dogs to the park to meet up with Auntie Cheryl and Rolo. As is always t he way when Rolo and Pogo meet up there was disaster; Rolo picked a fight with a dog the size of a carthorse.

We came home and had a rather good chicken dinner. You can tell when it is a good dinner – there is more than one dishwasher load to be scrubbed. SBOD had a bath, then played “I’m A Naughty Goose” on the I-pad.
As I write this, he’s having a squabble with his mother and grandmother. They say it is bed time; he says it isn’t. I’m not getting involved….