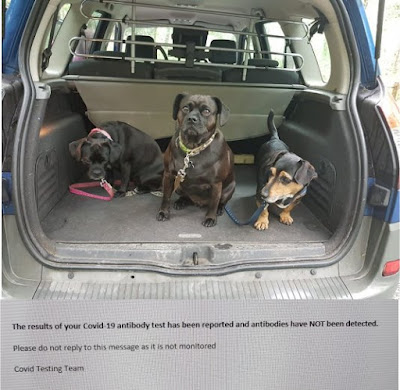 I slept rather well; I had plans for the morning and was rather disappointed to wake to find it was raining. But in (yet another) triumph of idiot enthusiasm over common sense I carried on regardless. I kicked "er indoors TM" out of her pit, got the leads on to the dogs, and we all drove down to Orlestone Woods where we had a very good little walk and didn’t get anywhere near as wet as I thought we might.
As I was taking a “boot dogs” photo in the car park, some hairy-scary chap sitting in the car opposite called out that the “boot dogs” pose was the most adorable thing he’d ever seen.
There were quite a few cars in the car park, but apart from the chap sitting in his car we didn’t meet anyone else at all as we walked (that’s the attraction of the place for me!)
The hairy-scary chap was still sitting in his car three quarters of an hour later when we came back from our walk. I wonder what he was doing.
As we drove home "er indoors TM" laid an egg. There had been a bouncer in Orlestone Woods (it’s a Munzee thing) and we’d walked past it twice without realising.

Once home I ran over my head with the trimmer (lock-down haircut – I’ve been doing my own for twenty years!) then had a later-than-usual look at the internet. I saw a friend had been made redundant. I sent a message of consolation; I wish there was more that I could have done. But from a personal (and very selfish) point of view this will make for interesting times in the geocaching world. The hours my friend worked gave him time to hide endless series of geocaches. If he ends up doing something nine to five, will anyone else pick up the slack?

I also had an email from geocaching HQ. Recently I’ve had a few people telling me that they’d walked my various series of geocaches but hadn’t signed any of the paper logs for fear of catching COVID-19. I didn’t actually laugh out loud, but… seriously?... When you go geocaching you scrubble (on your hands and knees) in tree roots and under dead shrubs in leaf litter (up to a foot deep) looking for a mould-and-bacteria-encrusted pot which has been festering in the mud for several months. But now everyone is hygiene-crazy and people won’t touch these little pots for fear of a virus with which they have (very likely) already been in touch. If people want a hygienic hobby then there is knitting or making a model railway…
(this is a rant I’ve done before…)
But leaving aside all of that, the rules say that to claim a find you have to sign the paper log. I messaged geocaching HQ last night for clarification, and they said “Caches may only be logged when the logbook was signed. This is still in effect”.
This puts me in a quandary. On the one hand I don’t want to delete the logs on what should be a fun little game. On the other hand there are half a dozen people who will be messaging me asking why I allowed this to happen…

I spent half an hour geo-puzzling then set off. The rain which had stopped just after we finished our walk earlier started again as I walked out to my car. I drove round to the petrol station at Sainsburys where there was a *massive* queue for the free air. What was that all about - had everyone got a puncture today?
Apart from nearly being splatted by a car delivering shingle to a bungalow in High Halden I had a rather uneventful journey to work; I even had time to capture the Munzee in the Odeon cinema near work.
I didn't know there still were Odeon cinemas. There used to be one in Hastings in the 1970s which specialised in mucky films (not that I ever went in there...)

I went in to work; I did my bit. As the afternoon wore on so I had an email. I had the results of my COVID-19 antibody test that was taken last week. It was negative; I haven't had it.
I was rather disappointed about that.