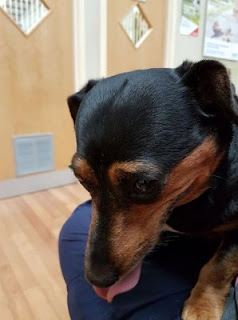 With a little time on my hands this morning I set about fixing the water feature for which I bought the new pump yesterday. I had the thing working in ten minutes. It was a shame that I had to buy a pump; the pump I bought was twice the price of the ones on eBay, but it had the advantage of actually being fit for purpose. Internet shopping is all very well when they send you the right thing.

I then took Fudge to the vets. He was walking *really* awkwardly this morning; so much so I thought he’d dislocated his left shoulder. I got to the vets before opening time and they kindly saw us right away. We were in and out in less than five minutes. The vet agreed with my theory that he’s overdone it in the river last week, but her manipulations of "Furry Face TM" showed it was his left hip that was painful, and so he was walking oddly on it which made his shoulder look squafty.
He’s on tramidol and “official” rest.

Pausing only briefly to collect "Daddy’s Little Angel TM" and "Stormageddon - Bringer of Destruction TM", I then drove down to Hastings to see my mummy and daddy. They were well; bearing in mind how ill they have been over this last year they both seemed to be on the mend.
As we drove home "Daddy’s Little Angel TM" was expounding her theories on religion. She’s decided to have one, but doesn’t agree with any of the established faiths. I wouldn’t put it past her to devise one of her own; she was talking about something to do with reincarnation. I expect this will blow over, the last thing I need is her as a religious nut.

We got home: I went to bed for the afternoon and slept for four hours, which was good. I got up and spent an hour of so putting my new Ronseal wood jollop onto the fence. Regular readers of this drivel may recall I painted the fences once before. Fence painting is a slow process. Last time it took an hour and a quarter to do each fence panel. I’ve got over twenty to do. That should keep me out of mischief.

I’m off to the night shift now…
Posted by Manky Badger at 6:42 pm