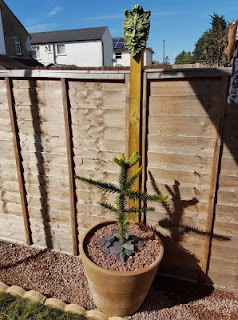 Another hot night; I slept reasonably well. However I couldn’t help but think about the scout group I used to be a part of. Every year for thirteen years I would be dragooned into a cub scout holiday over this bank holiday weekend. I never really wanted to go on the weekend away, but always felt I had to go. Over the years we had weekends in Deal, Dymchurch, Hastings… all over the place. I wonder where they went this weekend? And I wonder if last night went like it always used to…
On the Friday night just gone the little darlings would be wide awake until about 3am, and would be waking about 5.30am on the Saturday morning. As I scoffed my brekkie whilst watching “Detectorists” I was again glad I eventually managed to extricate myself from the grip of scouting. It really does suck you in and not let go.

I then had a quick look on Facebook. Yesterday I’d posted up a picture of Fudge laying awkwardly in his basket. Overnight loads of people had reacted to the photo and sent kind messages. As I read them my little dog was laying asleep in his basket. I fussed him a little, but didn’t want to disturb him.
I hung the washing out and set off to work.

I went via the co-op to get some cash, and then via the petrol station on the ring road. Again there were men ten years older than me attempting to charm the pensioner operating the till. They weren’t just being polite; they were seriously sniffing. What *is* her attraction? I wouldn’t, and that speaks volumes (!)
Mind you I was pleased to find my credit card worked after the debacle with the bank on Thursday. However I’d taken cash just in case.
As I then drove on to work the pundits on the radio were *still* banging on about the atrocity in Manchester. They had absolutely nothing new to say, but they still kept on about it. Even the Archbishop of York had a go on the topic during the “Thought for the Day”, though I have to say his attempt was feeble. Even with the radio turned up I could hardly make out what he was mumbling about. From what I did hear there were a lot of platitudes and the word “pray” was repeated more than a few times.

I got to work, I did my bit and came home. "er indoors TM" had taken the puppy to visit relatives. Fudge was asleep; he tried to get up to see me and immediately cried in pain. I settled him again, and he slept for the afternoon whilst I pootled in the garden. I started off strimming, then had a go at fixing water features.
There was a bit of a problem in that the pumps I bought from eBay were billed as having ten meters of cable, but I opened the box to find that they actually only had about one meter of cable. Useful. I had a rummage and found an old adapter in the shed so I was able to bodge one of the pumps and fix one water feature. I then shifted gravel, moved concrete, swept and tidied (all in between sorting laundry) until my elbow and back were too painful to do any more.
I don’t understand how people enjoy gardening. You break your back putting in hours of work just to keep the place looking just the same.

"er indoors TM" and Treacle came home and boiled up a rather good bit of dinner. After dinner I fancied a bit of port and cheese, and we spent five minutes throwing away all the expired crackers. I had an idea that a cream cracker couldn’t go off; you try tasting one that was best before 2014; they are mank!!!