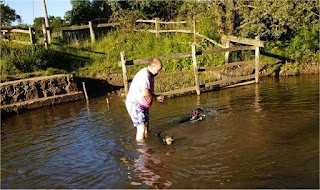 It was a hot night last night and the puppy was very restless. Consequently I didn’t sleep that well. I was up before 5am, and over brekkie I watched the last episode of the documentary about Queen Elizabeth I. It was rather interesting; for all that he people of the time didn’t have telly or the Internet, they were pretty much just the same as the people of today. Only happy when having a squabble, and much of their lives directed by nonsensical religions.
I then had a look at the Internet as I so often do. Not much was happening on social media, but I had a couple of emails. A chap called German Zollinger sent me a very nice comment about this blog in a thinly veiled attempt to get me to add his spamming comment. An employment agency told me that I was the ideal candidate for a role in Dumfries. But I was most interested in an offer from Apata Folasade Esther who invited me to speak at the 2017 World Congress on Global Economy, Peace and Terrorism In The World. This congress starts off in the USA and then moves to India and all I have to pay for is the hotel costs. Or so Apata Folasade Esther claimed.

As I dressed the dogs were squabbling about a bone. There are four of these bones about the house; Fudge wants the lot. If there were a hundred he'd not let the puppy have a single one.
I had words with my dog...

I set off to work; the pundits on the radio were rather concerned that the recent events in Manchester may have breathed new life into the moribund UKIP.
And there was also a lot of talk about the Conservative's plans to offer free breakfast to all schoolchildren. Apparently their figures were based on the premise that charities were giving the food for free and a take-up rate of about only twenty-five per cent of the eligible children. Their sums were totally wrong, but that was still seen as nothing by the pundits presenting the show when compared to the fact that they didn't like Jeremy Corbyn very much.

I got to work for the early shift, and an early start made for an early finish. With a few minutes on my hands I did the monthly accounts.
Woops.
Regular readers of this drivel may recall I blogged about a text message I had last Monday. It said I should ring the bank urgently, and when I did the bank knew nothing about it. At the time the people at the bank said it was probably a scam but it turns out it was a genuine text message. I completely forgot to pay my credit card bill last month and the bank wanted to talk to me about it. Even though no one there knew that they’d sent me a text.
I found out today that I'd been charged a month's interest and my card had been stopped.
After a while it got sorted (sort of) but what bothered me was the fact that no one at the bank knew anything about the text they'd sent me. I spoke with several people at the bank today who were all very understanding, and all said that the bank would probably have texted me if I had a payment outstanding. But not one could explain why no one at the bank on Monday had any record of the text they sent me. What is the point of sending a text saying "phone the bank urgently" if no one at the bank has any idea why I'm phoning them.
Oh well... payments have now been made, and my card should be unlocked by the end of the weekend...

"er indoors TM" came home and we drove the dogs out to Great Chart. We had this idea that they might like to go in the river on a warm evening. I certainly did. I was straight into the river, but both dogs seemed reluctant to get wet. However once they finally went in they loved it. We took a few photos as we do.
Mind you in retrospect we should probably have rationed Fudge to five minutes. He overdid it to the point of having worn himself out so much that I had to carry him back to the car.

"er indoors TM" went down to the chippy to get our tea, and we had an evening in front of the telly. I like those…