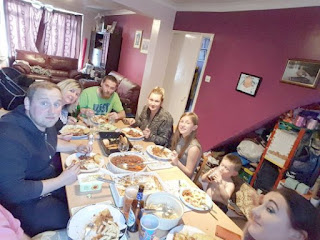 I slept rather well last night, probably not surprising really. I heaved myself up and waddled downstairs where I stood on the scales – I was three pounds down on last week. Not good, but not bad either.
I sparked up my lap-top and peered into the Internet. I had a rather impressively epic email about the myriad failings of one of my Wherigos (a GPS-based game); apparently someone had had a go at one of them yesterday and got stuck in the game. This person was very insistent that they had done a few before and they knew what they were doing and the fault was in the programming I had written.
I sighed.
The thing had worked fine in several trial runs, and nearly forty other people had played the game without problem. I was just about to email them to blather platitudes when they sent another message. All smiles. They had gone back this morning, rebooted the SmartPhone on which they played the Wherigo and all worked fine. Bearing in mind the final location of that Wherigo is just up the road from me I had half a mind to wander up the road and say “Hello”. In all honesty had I not been aching so much (after yesterday’s jaunt) I probably would have gone up with the dogs.

I then spent a little while correcting co-ordinates (it’s a geo-thing) and we then set off to Folkestone. Maria had invited us down for brekkie, and we put the world to rights for a couple of hours over a rather good full Spanish breakfast.

Pausing only briefly to get the makings of dinner from Morrisons we came home and tidied the house in readiness for the tribe to descend. We had a plan to have a family barbecue today, but what with the weather being iffy we decided to have a sit-down dinner instead.
It passed off rather well…

I did very little other than eat today…