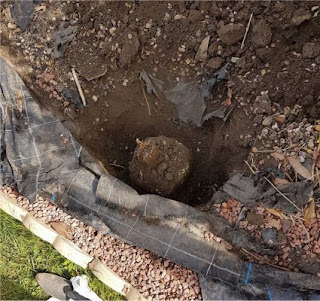 I was up rather later than usual today, but today was a rostered day off. I sparked up my lap-top and peered into the Internet. With nothing of note in cyberspace and a good weather forecast I messaged "Daddy’s Little Angel TM" to see if Sam fancied helping fix the broken fence post. There was no reply, so I made a start and hoped I’d get a reply later. Last Friday I mentioned that nice-next-door had taken their shed down, and that one of the fence posts was only standing because it had been wedged between that shed and the pot of my monkey-puzzle tree. With little else to do and supposedly good weather I thought I’d sort the fence (again).

I managed to move the monkey-puzzle tree’s pot and got the fence panels down, the membranes and gravel pulled back, and I started digging. Whoever had put the old fence post in had embedded it in concrete. Which is all very well until the post rots. When that happens you have little choice but to dig the concrete out. I’d got quite a bit of the concrete exposed when Sam arrived. He got stuck in and I suddenly realised we were missing a vital ingredient for replacing the fence post. We hadn’t actually got a replacement fence post.
I popped to B&Q.
I got rather annoyed in B&Q; I was using the self-service till when some interfering busybody member of staff shoved me out of the way and did all the self-service till stuff for me (as though I was thick). Had I not been in something of a rush I would have told her to stick it, and gone elsewhere. But time was pushing.

I came home to find Sam had got the concrete core out on his own. I was impressed. Mind you those things are heavy; that’s one of the reasons I need an assistant. It didn’t take long to get the new post in place and one of the panels in with it. We left the other panel out for a bit. Nice-next-door are doing their garden too and they said that they don’t want their shingle. They said I could have it, so I used the hole in the fence as a gate and loaded up every spare bucket I had with their shingle whilst Sam compressed the soil round the new fence post (and retrieved Treacle from nice-next-door’s garden a few times too).
With the last fence panel back in place Sam had to get away. I then sorted out the gravel and membranes around the new post and thought it might be lunch time. I got myself a sandwich and slept through an episode of “BattleStar Galactica”.

I then had a look at the shingle I’d liberated from nice-next-door. I thought about just bunging it round the bare patches near the pond, but there was some soil in with it. The shingle needed to be washed.
Have you ever washed shingle?
I can only describe the mess I made as akin to the mess the fruits of my loin made twenty-five years ago when playing mud pies. I got three small bucketfuls of stones washed then realised where I had gone wrong. I needed to be using a large flower pot (with holes in the bottom) and the pressure washer.
I looked at the pressure washer and thought “sod that”, got the washing in, and took the dogs for a walk round the park.

As we walked we saw an unfortunate lad who looked just like “Mr Logic” from Viz magazine, and we met Bernie. I’d not seen him for ages; it was good to have a chat as we walked round the park together.
Just as Bernie and I parted and went our different ways so the rain started. I was rather wet by the time I got home.
I took the rain to be divine intervention; a sign from on-high not to continue with the gardening. So instead I had a look at the household accounts. I wouldn’t say I was skint, but I could do with making a few economies. I’m currently spending thirty-eight quid a month on Sky TV. Apart from “Game of Thrones” I wonder what else I would miss with if I replace the SkyPlus box with a Freeview box and an Amazon Firestick.

"er indoors TM" took the puppy to puppy class, and I went to the Tuesday gathering of the clans. We started off playing with Chris’s new wi-fi-enabled doorbell, then tried to confuse the Amazon Alexa before watching “Gotham”.
Bernie joined us this evening. It was just like old times…