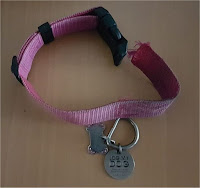 "Furry Face TM" was whimpering at the foot of the bed at 4.30am this morning. Bearing in mind how well he played in the river yesterday I suspect he could easily have jumped on to the bed but he’s learned that I’ll pick him up if he asks. But as well as waking me, he woke the baby. So once I’d settled my dog and myself, the puppy started marching all over us.
I managed to get back off to sleep and dozed until 7.30am when I woke with the most painful nose. Overnight I’d developed a rather unsightly zit. That soon got squeezed (yuk!)

I had brekkie; not much had happened on Facebook overnight. I had an email about a whole load of geocaches having sprung up in Battle Great Wood. I had planned to go off on a geo-walk this morning, but I changed my mind when I saw that rain was forecast. Perhaps I should have gone off to do that walk today. After all it wasn’t far from where Gordon and Norton live, and they went out and walked it.

I put some washing in to scrub, and took the dogs for a walk. We got just to the point where I was about to let them off of their leads when the puppy’s new collar snapped. That was a nuisance. By rights she shouldn’t have been out without a collar, but what could I do? We carried on with our walk. Today was an odd walk; there were a few people about but we didn’t see anyone we knew. Usually we see one or two familiar faces walking their dogs, but today there wasn’t anyone. Fudge trailed behind as we walked; we were forever stopping for him to catch up.
We got to the top end of the park; I reconnected Fudge’s lead to his collar, and not really knowing what else to do I made a lasso out of Treacle’s collar and led her with that. It was only a few yards to the co-op field; if the lasso didn’t work I planned to carry her on the last stretch home. But it seemed to do the trick, even if it did throttle her somewhat.

Once home I got out the lawn mower and scalped the lawn. I hadn’t cut it for some time; it needed doing. I then ironed for an hour or so; all the time getting more and more wound up that the forecast rain hadn’t come.
I spent a few minutes figuring out how to cheat at virtual jigsaw puzzles (it’s a geo-thing), and solved a few puzzles. After an hour the rain started. It was rather heavy, and I took myself off to bed for the afternoon with something of a sense of satisfaction.
I slept reasonably well; but my sleep was wracked with nightmares (afternoonmares?) about "Daddy’s Little Angel TM" fixing my mother’s shed. How can anything so trivial have been so traumatic?

I spent a little while thinking about a geo-day-trip to the Isle of Wight, and then "er indoors TM" came home. She boiled up a rather good bit of scran (she does that). and I’m off to my first night shift in Maidstone now. My last night shift was exactly four months ago. I wonder how tonight will go.
Let’s find out…
Posted by Manky Badger at 6:36 pm