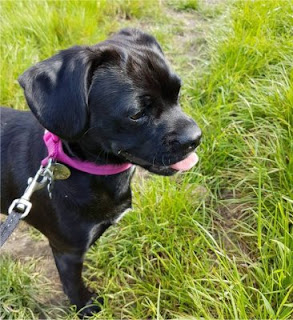 I got up and fussed Fudge. He’s on the mend, but oh-so-slowly. I scoffed brekkie, and as I scoffed I reviewed the recent logs on my Great Chart geo-series. Every time someone finds a geocache they have to write a little story. Most people write nothing of consequence and (to be honest) since I have getting on for a hundred active caches I don’t read the “Found it” logs. But having had that message over the weekend I thought I’d better investigate. It seems that a few people have had issues at the half-way point of the series.

Fudge was too poorly to walk, so I took Treacle for a little outing. We drove out to Great Chart and started our walk. I thought I might as well do a complete maintenance run whilst I was at it, and I got a bit cross. Inside each geocache is a bit of paper to sign. To stop it getting wet I put that bit of paper inside a film pot which goes in the cache.
Most of the film pots had gone. Now bearing in mind that the paper inside was still there and that the caches were still there, where had the film pots gone. Stolen by other cachers for their own use? If people are that poor I’ll buy them new ones to save myself the inconvenience of having to replace them.

We had a good walk through fields and woods meeting goats, horses and cows. Treacle even chased a squirrel. All was fine until we got just past point 8 where the footpath had been “sort of” blocked, but was passable. From here on in was somewhere that people had often whinged but the footpath was clearly marked. There *were* horses in the field but there always had been.
But when I got to the lane at point 10 I saw a notice from the council which was all about a statutory footpath diversion. Effectively that stuffed up my route. We then followed the route back to the car collecting the caches as we went. I’ve archived the lot; the walk is impassable now.
One thing which boils my piss about geocaching is that people start off by finding a magnetic jobbie stuck to a road sign and then just carry on. Very few people come to it with any experience of hiking in the countryside. Few people realise that you can’t just randomly wander wherever you like. And few people realise that maps are different. Open Street maps are simply rubbish; they don’t feature most of the rights of way. Most people won’t use Ordnance Survey maps as they cost. And most people don’t realise the difference between a closed gate and a statutory footpath closure.
If people had told me there was a statutory order some months ago…

We came home and I wasted a few minutes trying to repair a water feature. But I didn’t have the right attachment so I gave up.
I was just about to pootle on-line when I thought I’d check the house phone for messages. There was a message from the police following up on my call about nutty-next-door that I made to them on Sunday. They asked if I could phone them back and quote reference blah-de-blah. So I did. Apparently my ex-neighbour is alive and well, but “Damien” (Force Number 59827) made it crystal clear that he was far too busy to do anything other than say that he was alive, and rather insinuated that what this chap does with his life is none of my business. I suggested he checked the records to find out why I was concerned; “Damien” said he was too busy.

My phone then upgraded its operating system (which was nice for it) and I then emptied the photos I’d taken over the Bank Holiday weekend and put them on-line. Bearing in mind I’d worked for a large part of two of the days I was amazed to see just how much I fitted in between leaving work on Friday and going back this afternoon.
Never a dull moment.

I drove to work via the Aylesford aquatic centre where I go the right attachment for the water feature, and then on to work….