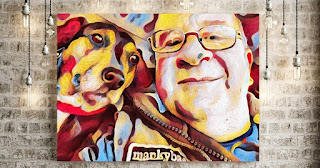 Being on the late shift today I didn’t have an alarm set and I slept a *lot* longer than usual. I liked that. Over brekkie I had a look-see at the Internet (doesn’t everyone?) As usual, happiness, trivia and squabbling abounded in pretty much equal amounts.
I did find a link which turned your photos into works of art; I was quite pleased with the result.  I also found the official video of Sparks’ latest single. It’s rather good. I can relate to it. “What The Hell Is It This Time” relates to God getting just a tad peeved with the relentless tirade of prayers demanding trivia.

I glossed over the latest scamming email from Nigeria (from Miss Rose Richard this time – she hopes I have a good moment!) and I took the dogs for a walk.
As we walked up the road we met the old Irish chap we see from time to time. He’d not met the puppy before; is it that long since we last saw him? We carried on into Bowen’s Field and did our usual circuit of the park with "Furry Face TM" straggling far behind. Sometimes I worry that the walks are a bit much for him, and other times when he charges off for whatever canine flight of fancy it is that takes him I wonder if he’s just becoming more and more wilful.

We went round the park and just as we crossed the co-op field so the rain started. Not much, just a shower. We came home; I had intended to do laundry and mow the lawn, but the forecast showers put me off of that idea. I settled the dogs and went off on a little adventure.

I went to Angling Direct (used to be Ashford Tackle), and promptly wished that I hadn’t. The staff were all too busy to see to me; they were entranced by some vacuous old windbag who was complaining that he’d been thrown off of some fishing venue because he was making a cup of tea, and boiling water is against health and safety. Most fishing shops have a fishing bore at the counter who buys nothing but somehow monopolises the place. I need to find a more convenient place to shop.
Mind you I then went to Argos where I got a fishing brolly for half the price of the one in Angling Direct.

I then drove into Aylesford; I had a look in the aquatic shop there, and then totally failed to find a fishing tackle shop that Google said was nearby. So I consoled myself with McLunch, and then went to the late shift where I spent the rest of the day being thirsty.

Why do McDonalds smother their food in salt?