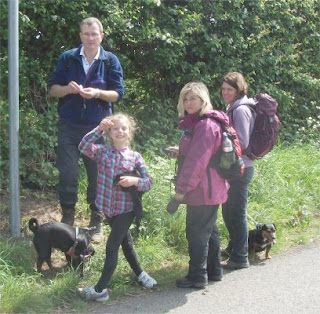 I woke to find I was cuddling my dog as though he was a teddy bear. He seems to be unusually affectionate at the moment; he’s been sitting with me on the sofa for the last few evenings. I wonder what’s got into him.

I had a quick look at the Internet over brekkie. The crowdfunding attempt by Brighton Kite Fliers isn’t doing very well. Only three hundred and fifty quid in two weeks. Bearing in mind how may thousands of people have such a good time there, I was rather disappointed.

We got the dogs leaded up and set off to East Peckham (not the London one) where there is a series of puzzle geocaches. These ones are very easy to solve (I’m told). However I’ve been looking at these C.O.E. puzzles for some time now and haven’t got the faintest idea how they might be solved. So last week at the Kent Mega I met the chap who’d set the puzzles and gave him a bung for his favourite charity and he gave me two pages of solutions to his puzzles.
Perhaps not the way they are supposed to be solved, but he’d be the one deleting the finds if there was an issue with it.

We met up with Karl, Tracey and Charlotte and were soon off on our walk. I’ve often wondered why so many people who go abroad for holidays bang on about how beautiful it is abroad; Kent too is beautiful. Not an hour’s drive from home was the prettiest scenery and paths through the hop farms. As we walked we saw ponies and traps, cows and calves, sheep, horses and pigs. We had a rather good picnic in the countryside, and had three pints (straight from the barrel) at the wonderfully-named “Bush Blackbird & Thrush”. And I even took a few photos too.
We started walking at 10am; eleven miles, fifty-eight geo-finds and seven hours later we got back to where we’d started. I (and the dogs) dozed much of the way home.

Once home "er indoors TM" was a quick scrub and (once she’d fed me and the pups) cleared off out to the film night thingy. I settled down in front of the telly. Had I known I was to be “home alone” yet again I might have organised something to do.
Mind you I’d probably just have stared at the telly…