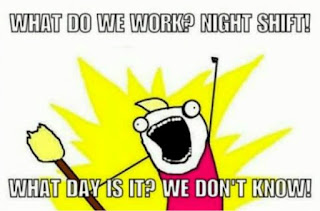 After a few days of good sleep I set an alarm for this morning, and found myself wide awake from 3am onward. Mind you I’ve had a rather good little holiday over these last few days. Dinner with mummy, gardening, a bittersweet reunion, the Kent Mega, a sixteen-mile walk, breakfast with friends, dinner with family, and catching up with old friends.

Today was back to the routine; get up early,, shave, brekkie whilst watching telly, and then I had my morning look into Facebook. Not much had changed really, but I saw that the astro club had appointed a new secretary to replace me. I wish her well; let’s hope she doesn’t have the same degree of nastiness and vituperation thrown at her that effectively forced me out of the role.
I also saw that the chap on night shift where I used to work had posted the little cartoon above (about being on the night shift). It was a harmless little joke; exactly the sort of thing that got me a formal disciplinary warning five years ago about bringing the hospital into disrepute when I posted something along the same lines. It is odd how people working there could post all sorts of things on social media but I got an arse kicking over something so utterly innocent and trivial. Victimisation?
I also had an email from Emmanuella Clement whose liver has (apparently) been poisoned by her step-mother in an attempt to cheat her out of her inheritance. As scam emails go it was rather pathetic really. I can’t see how anyone aged five or over would have been taken in by it.

I set off for work; it was raining. I took a little detour to the petrol station on the ring road. I went there a few weeks ago and wasn’t impressed. Today when I went to pay for my petrol the woman behind the counter made no secret of the fact that I was interrupting the call she was making on her mobile phone.
As I drove up the motorway the pundits on the radio were talking about the cost of Brexit. When the remain and leave camps were canvassing votes for the referendum as to whether or not we should stay in the EU the leave camp were crystal clear that leaving the EU would save the UK money. Now it is apparent that leaving the EU will cost the UK dearly. Figures of up to one hundred billion euros are being bandied about.
Had I bought Brexit in a shop I’d be taking it back.

I got to work and had a rather good day. And with my bit done I made good time home, and together with "er indoors TM" we took the hounds for a stroll up to the post office where I collected a parcel. Last week I ordered a couple of pumps to replace the broken ones in the garden’s water features. I’ve now got them. Between repairing those water features, washing gravel and painting the fences I have quite a bit of work to do in the garden. Oh well, it will keep me out of mischief.
On the way home we saw an egret. There’s several of those round Ashford.

"er indoors TM" boiled up a rather good bit of dinner, and with that scoffed I then found myself falling asleep. If only I had slept better last night…