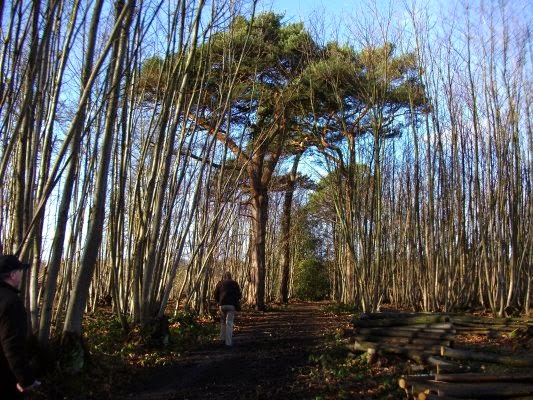 In retrospect last night's phall was a mistake. After six pints of "Cocky" it seemed like a good idea. After half an hour spent sitting on the loo at 4am I might just have seen the error of my ways.
Rather than wasting the day staying within sprinting distance of a toilet I decided to stick wiith the original plan. The valiant band of tupperware-hunters gathered (only half an hour later than planned) and we drove out to Sprivers; a little area of woodland owned by the National Trust. Seven well-placed geocaches led us on a good walk on a rather bright (but cold) morning. The caches themselves were good; some what we might expect; some rather tricky and well hidden. And some which were rather genius. It was a shame that my being somewhat heavy-handed broke one of them. I've sent an email to the chap who hid it begging forgiveness.
I took a few photos whilst we were out; these were rather pretty woods.

With walk done we then drove up to the Hop Farm for the monthly geo-meet. This was the formal lauch of preparations for the Mega-meet in May. I spent a few minutes chattting with the organisers about the astro club's involvement in the stargazing event on the first night, I had a rather good plate of fish and chips. I got one or two hints for some geo-puzzles which have (till now) eluded me, and despite having less than full reliability in the guts department I still shifted four pints of Spitfire.

I then proceeded to sleep all the way home, and once home I tried to put the hints I'd been given to use in solving geo-puzzles. And failed... I shall try again later.
"er indoors TM" set ooff flogging candles and I put on a DVD. "Essex Boys" is a film I've seen before; I quite like it; it was ideal viewing for a quiet evening spent waiting for my guts to settle....
I think I'll have an early night.