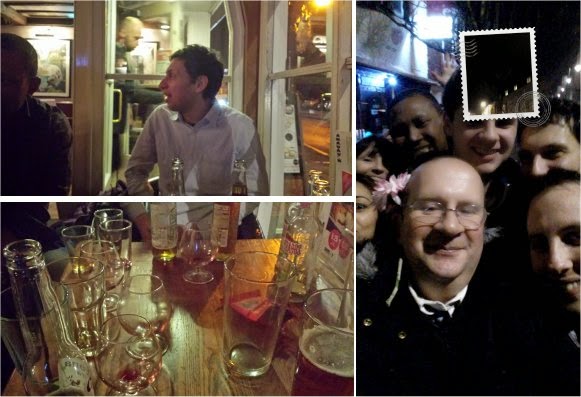 Last night's sax lesson went surprisingly well; and I learned something. It turns out not all notes have sharps and/or flats. Mine certainly don't, but some of them aren't actually supposed to have them at all. Apparently there isn't actually a note called "E-sharp". When you see E-sharp in the music you are supposed to play an F instead (go figure!). I asked why they don't just write "F" on the stave in the first place; teacher assured me there is a valid reason for making the entire process needlessly complicated.
As with alll things musical I took it on faith and kept my (non-sax-related) noise down.

As I drove from the music school to work I listened to the radio. There was an alternative comedian on the air. Let me qualify that - Bridget Christie isn't so much an alternative comedian as an alternative to a comedian. I suppose some might find her feminist rantings offensive. I didn't. Mind you I didn't find them funny, entertaining or amusing either. I listened to the show for half an hour wondering what it was supposed to be. Comedy? Satire? Feminist Politics? Listen for yourself and tell me...
Would I be really out of line by putting in a formal complaint about the show to the BBC? Now so much about the show itself as about why the BBC isn't running stuff which is worth listening to instead.

I called in to Morrisons for a bottle of Doctor Pop. A 100ml bottle of branded fizz is over a pound. Two litres of Morrison's own Doctor Pop is fifty pence. I know what I'm drinking(!)
And then on to work where (in between actually doing stuff) I listened to the radio some more. There were news programs, documentaries, plays. Readings from novels and interviews with Australian footballers. All sorts of trivia was aired overnight.
Royalty is facing baseless allegations, the wrappings of fag packets is to change, e-cigarettes might be more dangerous than the real thing. And Arab Kings have died.
But most importantly in my world is the revelation that nudey jubblies are to return to our newspapers. Hoorah(!)

I do like the night shifts, but last night's did seem to drag. I was rather glad when the day shift turned up and I could set off homewards. Getting home was easier said than done; with road works at Chilham and no real alternative route home (without going well out of my way) I was half an hour later home than I might have been.
Once home I realised I'd lost my aastro club woolly hat (again), andd so got a cold head as I took "Furry Face TM" for a walk round to the park. As we walked we tried to pick fights with several mopeds, a dustbin lorry and a shop. Other than that the walk was relatively uneventful. I was pleased about that - I was rather tired after two night shifts. as we walked I replaced two of my geocaches which had gone missing. they sem to do that.

WIth the walk done I set my alarm and went to bed. It was a shame tthat my dog declared "Red Alert" for no discernable reason some two hours before I actually wanted to get up. So with time on my hands I took the train to Canterbury and wasted some of it on a seven part multi-geo-thingy. I must admit I wasn't expecting much from this particular multi-geo-thingy; the chap who first hid it (several years ago) hid many others around the county at the same time and left most of them to fall into disrepair. So much so that when I see his name I expect to put a "Needs Archiving" log. But not this time. This one featured a well thought out walk round the town ending up with a decent cache in a rather scenic place.

I treated myself to a McFlurry then made my waay to the Wetherspoons to await the arrival of my colleagues. Unfortunately the inestimable Soup Boy (patent pending) is leaving for pastures new. He's decided to take a year to build up his physical fitness in order to attract commercial sponsorship. He wants to be a professional runner. Some see this as rather brave or foolhardy; I admire him. Better to have a go (and maybe fail) than not to try.
People soon arrived, and had the odd half-pint of shandy. Personally I went with six pints of "Cocky" (no surprises there) and pausing only briefly over a case of mistaken identity in the gents we then went for a curry.
I had a phall...