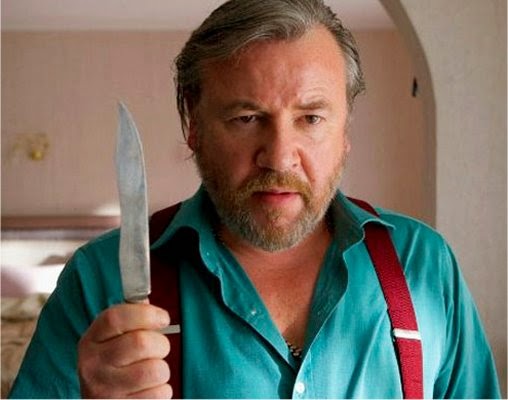 Last night I wasted ages messing about with a geo-puzzle. I couldn't solve it. This morning I woke and suddenly realised that five times five is not twenty-three, and went on to get the thumbs-up from the geo-checker in a matter of seconds.
I came downstairs, mopped up the small puddle of dog tiddle (I never wanted a dog) and over brekkie watched an episode of "Game of Thrones". A fully-dressed Nudey DragonGirl appeared fleetingly, and for all that there was a lot of bloodshed no pork swords were wielded in today's installment.

I set off to work; a new geocache had gone live nearby. I didn't think I'd get the FTF; I didn't. I then went on to Junction 11 of the motorway for another quick geo-church thingy. From there I made my way to Morrisons. Before Christmas they had gadgets for hoiking the hair out of your lug-holes and nostrils (it's sad to grow old!). They've now sold out. I shall have to try eBay

As I drove Ray Winstone was being interviewed on the radio for "Desert Island Discs". Having been on telly for years playing assorted tough men I didn't realise he was actually an ex-boxer; and a rather successful one at that. I've always liked Ray Winstone as an actor; I particularly liked him in "Scum" and in "Henry VIII". Mind you I did think his choice of records this morning was a little pretentious. But I seem to think that of everyone who is on "Desert Island Discs".
Perhaps if a few more people went for records by Sparks, ELO and Ivor Biggun I might respect their choices a little more.

I got to work for the late shift; the car park seemed rather empty. I suppose a lot of people are still on holiday. I had thought about taking the day off; but I've just had a week off. Going back in for just one day might ease me back into work gently. So I eased myself back into work gently. At lunchtime I also eased myself gently back into sax practice. I'd let that slip over the last week. Having spent a week playing what I want to play, and then a week playing nothing at all I felt I really should get on with the set homework.
Homework this time involves "improvising". It seems that what at first looks like random improvisation actually follows rather clever musical rules. You can't just play any old note in any old order - that just makes a noise.
I'm getting the hang of it, but it's not easy...