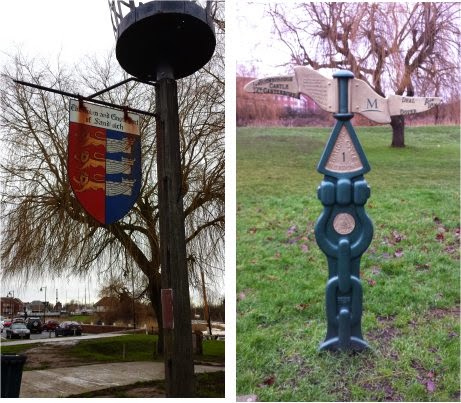 Unusually I woke a few times in the night tangled in the hose of my CPAP machine. It's surprising how little I actually tangle myself in the thing. Mind you for all that it does allow me uninterupted sleep I don't like the device. As I put it on every night I feel like an old man on his death bed.

Over brekkie I fought with the router. It wouldn't work at all, so I tethered my laptop to my mobile phone to get on-line and I looked at the weather forecasts for various places around Kent. The forecast for Sandwich was light rain for much of the day, so I wondered about rescheduling our planned trip and going elsewhere. But the forecasts for everywhere in Kent had rain except for Ashford. The forecast for where we were was fine all day. But bearing in mind it was actually raining I decided to treat the weather forecasts with the contempt they deserved and continue with our plan.

We rallied the troops and five of us (and two small dogs) went on a geo-mission to Sandwich. Don't get me wrong - I liked our walk round Battle last week, but I really fancied somewhere mostly on tarmac and off of mud for today. Sandwich fitted the bill. On the map we'd found a geo-series of ten caches laid out around the town (with four church micros as an added bonus). It turned out to be a really good walk. We covered about six miles without ever being more than about a mile away from where we'd left the car. Being on roads and footpaths the going was easy.
I had hoped to pick up one or two puzzles that I'd worked out were in the area. On going to the locations that I'd calculated that we needed to visit it became apparent that I'd calculated wrongly. I shall try again.

With the walking done we went into the Red Cow for a crafty pint. As well as having public toilets with attendants, Sandwich isn't short of a pub or two. I may well organise a pub crawl round there at some stage. It was actually quite a scenic place to visit; it's only a shame I forgot to take my camera.

We came home via Kim & Andy's where we had a few bottles of home brew (hic!) before coming home with a replacement router. On arrivall at home the exisiting router seemed to be working, so we are keeping the new one in reserve for the time being.
There was a worrying episode when my PC wouldn't start. After a few minutes of doing nothing it then launched a startup repair screen. After ten minutes I got a message that the thing was utterly beyond repair and iit turned itself off. I wasn't taking any old lip from it so I turned it on again and all was fine. I wonder what that was all about.

With "er indoors TM" off bowling I sppent a few minutes giving my expert opinion and advive (ahem!) to a novice wheri-writer. Someone on the wherigo forum had asked for people for advice and suggestions on her first Wherigo.I'm no expert, but I offered to give her first effort a quick look-over; if nothing else I thought I would probably learn something myself.

I then dozed in front of the telly with my dog. He seemed worn out; our Sunday walks do seem to take it out of him. I keep forgetting what short legs he has...