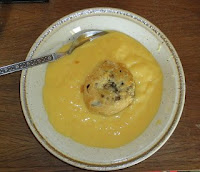 The rain continued for much of the night, but having slackened off just as it got light I thought I'd have a spot of morning fishing. Having had a day of torrential rain the pond side was a quagmire and the fishing tackle was awash. But despite all odds I was soon bashing tiddlers like a thing possessed.

After a little bit of brekkie (camp brekkie is always excellent) shopping missions were dispatched as were caching missions. And after discovering that "Furry Face TM" is partial to Benenden sauce we made the most of the good weather by continuing our work with the duck houses. We got the duck houses onto a trailer, took them down to the yard and gave them a good hosing down. There is something very satisfying about hosing duck dung with a power washer.
And with duck houses glistening like new we had another beer, and enjoyed the afternoon. Some took pot shots at targets with air rifles, some went off to the nearby hippie-fest. Me - I alternated between beer and dozing in my chair in the sunshine before going fishing. Fishing was fun. We didn't catch much but we got to laugh at the Rear Admiral's phone which hadn't really enjoyed having been charged and was having a sulk. A sulking phone is a sight to behold. As is someone attempting to do anything with such a phone. I suspect there is an app for sulking phones. However I defy anyone to download it; especially with the Rear Admiral's phone when it is having a cob.

Chip visited. as a stalwart af previous Bat-Camps it was a shame he couldn't have been along for the entire weekend. And as we waved goodbye it was tea time.
Tonight's tea was something new - pork steaks. Very good. Very tasty. And as the beer got to the point of being far too much we had cake and custard. As it was said at the time, what's the point of being sensible if you have custard. We sat around the camp fire drank port, and dozed off.
Good times...