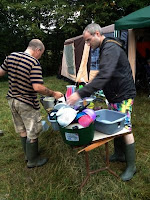 We had all seen the weather forecasts. We knew today was not going to be a good day weather-wise. I woke to the sound of rain on the tent in the middle of the night, and lay awake listening to the rain for much of the rest of the night. It was too wet to go fishing, so I didn't bother. I had a bit of a lie-in, as did everyone else. It was gone ten o'clock before brekkie was done.

We got washed up, and shopping missions were dispatched. With a restless dog and the rain slackening off to a medium monsoon I thought I'd take "Furry Face TM" for a walk. I needed to get a cache for the day anyway. I got the cache just as the rain started. By the time I was back at camp I was rather damp. As was "Furry Face TM".
Lunch was announced, and with little else to do we declared Emergency Plan "B". As emergency plans go, "B" is my favourite, involving (as it does) copious amounts of beer.

Steve and Sarah arrived to visit for the afternoon and evening. It was really good to see them, it was just a shame that the weather was against us. We spent much of the day tipping rain water from where it was pooling in the tent. Mind you, we did have sweeties and cake. And beer.

The evening meal was good. We'd not had stew with dumplings at camp before. I think we should have it again. But next time we should stir the stew. The washing up took some serious elbow grease this evening. And having worn myself out doing the washing up we had a beer or three more and just the tiniest soupçon of port. Hic...