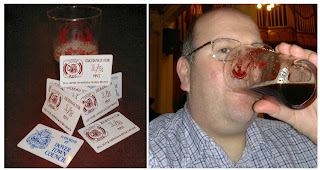 There are quite a few events in my life that get pencilled into my diary as soon as the event is announced. beer festival is one of them. An early start for once as three of us met up at the Kiln Café  for a spot of brekkie. I’ve recently become something of an aficionado of the Full English breakfast and I think that (so far) the Kiln Café does the best one locally. It’s a shame that the place is spoiled by the owner having the children from hell charging round the place.
With brekkie scoffed we were soon on the train to . Collecting the Rear Admiral on the way and meeting Steve at the queue for the festival, we were soon handing over our entrance money. And then the fun started. We paid to get into the place, which was fine. We then had to join a separate queue for glasses and beer tokens. Oh dear!
I realise the chap was a volunteer and was doing the best he could, but he was useless. It was as though every transaction he did was his first. He was dithering, counting out wrong amounts of tokens and generally getting very confused. But to be fair to him, I blame the organisers. Whilst this poor old bloke generally got himself into a pickle with the tokens and the queue grew longer and longer, there were half a dozen other volunteers standing behind the bar waiting to serve the beer. Surely some of them could have helped with glasses and tokens?
Eventually we got glasses and tokens. I had one token too many. Steve had three too many. Dan had already arrived and had found us a table. However in bagging us somewhere to sit he’d gotten himself to the back of the queue for beer tokens.
Eventually we were all seated and drinking. Some old friends from Eurostar walked by and joined us, and with the arrival of Irene and our party was complete. The rules did say that we weren’t supposed to bring food in, but everyone else had, and so we started on our feast and we started on the beers. I used all my tokens:
I told the organisers off. They always have live music on the stage. And it’s rather genteel music. But so quiet that you can hardly hear it. In fact they’d been playing for twenty minutes before anyone realised. I got them to crank up the volume, and we sang along with the hippopotamus song (Mud, mud, glorious mud), and had quite a rousing chorus of Rule Britannia. I really need to learn all the words to that.
But time was pressing on and the tokens were all spent. We could (relatively) easily have bought more tokens, but with the weakest beer at the festival being 5% ABV, and all the weak beers having sold out. We thought we’d best move on.
I’ve slated Blakes of Dover on pub review websites before, but to be fair to the place, it is by far the best real ale pub in . And seeing how quite a few of our party were keen to visit, we thought we’d give it a go. And we were pleasantly surprised. In the past I’ve encountered a very conceited attitude from the bar staff and the locals. There was none of that today, and we struck up a conversation with a pair of blokes from who’d come to for the weekend for the beer festival.
By now we were peckish, and so adjourned for fish and chips. Or so I see from my photos. We must have had chips, but I have absolutely no memory of this. There is a blank between Blakes and waving goodbye to Steve, before we adjourned to the Wetherspoons for a crafty half. The original plan had been to shout at the rugby, but we were far too late for that. And so, after a pint of Wantsum (the Rear Admiral did!) we got the train home.
Same time next year…?
Posted by Manky Badger at 11:36 am