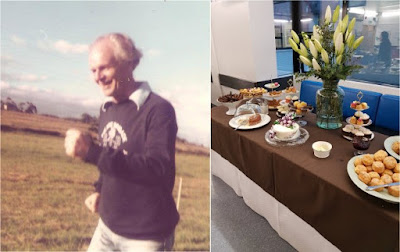 As a lad I was a member of the Boys Brigade. It was a major part of my life for many years; through it I made friendships that have lasted a lifetime. Just as I was about to go to bed last night I had a message from a friend of forty years. The chap who ran our Boys Brigade died yesterday morning.
I’m not going to get all soppy; everyone dies. But not everyone lives like this chap lived. He was a larger-than-life character who gave his all for others. He ran Boys Brigade activities on Wednesdays, Fridays and quite a few Saturdays. On Sundays he ran the Sunday School in the morning and was an active Church Steward in the evening. On Mondays he would often be helping with the Girls Brigade. On Tuesdays he was very active in the local table tennis fraternity (from where he earned the nickname “batslinger”). He didn’t do much on Thursdays – he deserved one day off each week.
He ran the Boys Brigade for years; for much of the time on his own with very little help and with no public recognition of his efforts. This morning as I peered into Facebook there were quite a few people who were sad at his passing.
I thought he’d moved to America ten years (or more) ago. It turns out he lived not far from my brother all along. Amazing how you can live so close to someone for years and never run into them.

I also saw that a good friend had posted on the local geocaching page. Having bought a load of geocaching containers he’d had been told exactly how he should be using said containers by people who’d not hidden a cache in years. And when someone who had hidden a cache recently commented, a squabble was threatening to kick off.

I took the dogs round the park. Yesterday’s walk was something of a disaster; today’s was a bit better. Pogo didn’t shout at quite so many dogs, but he did bark at one or two passers-by. I wish he wouldn’t. Sometimes I can see why he kicks off; other times I haven’t a clue.
As we walked we saw that the gardeners had been out. Fudge’s favourite bush is now completely gone. Such a shame. I have no idea what the fascination of that particular bush was, but he loved sniffing round it. Now it has been completely removed.

With all four dogs fast asleep I quietly left the house. As I drove, "Women's Hour" was on the radio. Today they were talking about over-protective parents. They were interviewing a teacher who was talking about an app that their school uses. When homework is set, the parents get a notification about that homework. However the school has had several complaints because immediately on getting the notification, some parents drop what they are doing to make a start on the child's homework. Some parents have even lost their jobs because they have been doing school homework rather than their job. I would have thought that the idea of this app was to let the parents know what was going on, *not* to tell the parents what they themselves had to be doing. Apparently in some schools it is now rather obvious that the parents have done the homework, but not that easy to prove.
The teachers were saying that it is far better for the children to do their own homework and get it wrong (so that they get used to the concept of failure) rather than having the parents get it all right for them, and when they do fail at something later in life, the failure comes as a serious shock.
Apparently for many children their first failure is the driving test, which is rather traumatic. It was claimed that the schools in Japan ensure that children regularly fail, and learn from their failures, and so failing isn’t seen as quite such a monumental disaster.
Funny old world…

I drove up to West Malling where I had a little Munzee adventure, and then drove to work where I put out a few more Munzees. I scoffed a rather good pasta thing for lunch, and then did my bit.
Work was rather distracted today; the boss was retiring. We had a little tea party, and I told whoever would listen that in one thousand five hundred and four days I would (hopefully) be looking to start semi-retirement.

The late shift was rather busy after that…