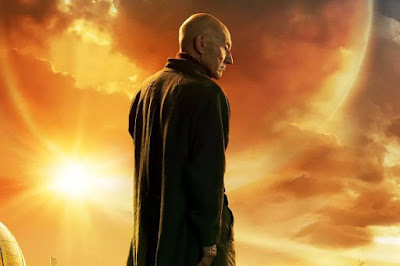 I woke feeling full of energy and raring to go, only to find it was half past midnight. I dozed fitfully for the rest pf the night seeing every hour. When five o’clock came I gave up any attempt at sleep, got up, and over a owl of granola watched the first episode of the new series of “Star Trek: Picard. This is my sixth first episode of a new brand of Star Trek, and probably the best first episode of any of them. There’s a lot of nods to what has gone before, but subtle. It’s not “fanwank” as it could well have been.
I’m looking forward to the next episode.

I then had a little look-see at the Internet. Judging by what I saw on Facebook it would seem that not many other people had been up watching Star Trek in the small hours. Or if they had, they hadn’t told the world about it.

Remembering the amount of traffic jams I got stuck in on multiple sets of road works on the way to work yesterday I set off earlier than usual. Despite a couple of diversions (for Munzee purposes) I made good time; better than yesterday. Do less people *really* travel on Fridays? - it certainly seems so

As I drove the pundits on the radio were interviewing the Right Reverend Nicholas Holtum who is the bishop of Salisbury and the Church of England's lead on climate change. Apparently the Church of England aims to be carbon neutral by the year 2045, and all sorts of environmentally-friendly ways of heating cold churches are being planned. I would have thought that asking God to get involved might have been high on the list of suggestions, but this wasn't mentioned at all. Odd - I was always led to believe that the Almighty was a dab hand with a thunderbolt which might warm things up. Or is it "him downstairs" who does the fire and brimstone?
Though, on reflection, I can't help but think that the Bishop was somehow missing the point; surely church is all about hours of hypocrisy in sub-zero conditions? I would have thought that being cold would encourage a pious outlook?

The Church was also in the news today with some out-of-touch vicar or other saying that it was God's holy plan that "doing the dirty deed" was only to be done inside heterosexual wedlock. When challenged about this, the vicar giggled a little, and said that the church is very slow to move with the times, and then blathered platitudes.
Surely the church *shouldn't* move with the times. What it teaches is eternal truth, or it is not. Or does God's holy plan change with the times too? I know that mine does, but I'm not running the universe (nor do I want to!)

I stopped off at Tesco to get some screen wipes (as my car's windscreen is a tad grungy). They didn't have any, nor did any of the staff appear in the slightest bit bothered that they didn't have any. Customer service, eh?
Work was work, and with the exception of some basophilic stippling (it's a red cell thing) the day passed off relatively uneventfully.

I came home to a letter from some do-gooder who is trying to start up a neighbourhood watch. I think I might join, if only to wind up the racist xenophobes who tried to start one before. The last attempt died when the nasty bloke trying to run it realised that being Polish *wasn’t* a criminal offence.
I sent an email to the email address that was given on the letter – it bounced back as “undelilverable”. I shall give them a ring tomorrow…