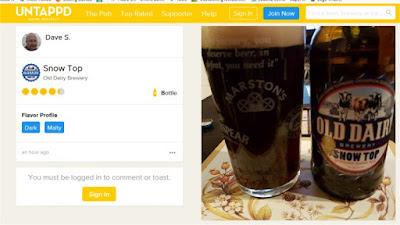 I woke feeling rather rough. Was that the aftermath of the night shift, or the aftermath of the bottle of red wine that we guzzled last night?
Over a bowl of granola I watched another episode of "Schitt's Creek". I'm really getting into the show, but one thing about it bugs me. One of the leading characters in it is called "David", but because the family is supposedly posh and well-to-do, they all pronounce his name as "Defud". I wonder if I should be known as "Defud" (in a thinly veiled ruse to enhance my social standing).

Remembering the amount of traffic I saw queued back on multiple sets of road works on the way to work yesterday I set off earlier than usual. I made a quick diversion (for Munzee purposes) and was soon on my way to Tunbridge Wells. I was right to have left early; I found myself held up in five separate delays.
As I drove the pundits on the radio were transmitting from Davos (in the Swiss Alps) where world leaders were meeting as world leaders do. Donald Trump had been on the stage a day or so ago and had been telling everyone how wonderful he was. Whenever I hear him talking I am reminded of my days as a scout leader when some of the more "special" and "simple" cub scouts would witter on about whatever banal triviality was going through their heads regardless of whatever the topic of discussion was at the time. Donald Trump would make a perfect "special" eight-year-old cub scout.
Today's radio also featured a lot of talk of environmental issues. Reducing eating meat was seen to be a priority, but those being questioned had no answer to the proposition that eating a cow bred in the UK has a far lower carbon footprint than eating an avocado which has been flown half-way round the world.

There was also a lot of talk about the maternity services at my local hospital. It was alleged that over the last few years there have been several unavoidable deaths. Perhaps there were? The trust's mortality rate for stillbirths and those babies who die within a month of being born has been consistently higher than the UK average for every year between 2014 and 2017, and in 2017 (the last year for which figures are available) its rate was the highest in the country.  But do these figures mean anything? Bearing in mind the morning's news mentioned seven deaths in the last five years, and when you consider just how many hundreds (if not thousands) of births there have been in that time, is seven a high figure? Really? It's a very sad fact that not all small children do survive. Is this really a case of investigative journalism, or is this the BBC just shit-stirring to (yet again) knock the NHS?
However I will say that ten years ago the local hospital was voted best hospital in the country, and now it is in "special measures" and its failings are headline news on national radio. How that place has gone downhill.

Ironically today marks three years since I left that NHS Trust and went to work elsewhere.
It's not been a bad three years... Personally I wish I'd made that move years ago.

I got to "elsewhere" and did that which I couldn't avoid. During a lull in the work I had a little look at my professional regulator's website; specifically the bit about the recent hearings that have been held when people have made the sorts of mistakes that today made my local hospital headline news. I won't lie; I was wondering if anyone from that hospital was up before the regulator.
I didn't see anyone from there, but I did see one case which made me sit up and take notice.
One chap had been accused of not paying the car park fee for  the car park at his place of work. He was found guilty, and was struck off the state register. That's not only sacked, but sacked and unable to work (in that profession) in any hospital in the country. Makes you think, doesn't it?

Driving home was every bit as delayed as driving in to work had been. Eventually I got home, and took the dogs round the block.
"er indoors TM" boiled up a rather good bit of scoff which we devoured and washed down with the last of the Christmas stout. As we scoffed we watched more episodes of “The Dog Whisperer”. We are watching *loads* of dog training programs on the telly… some of what we learn works on Pogo.