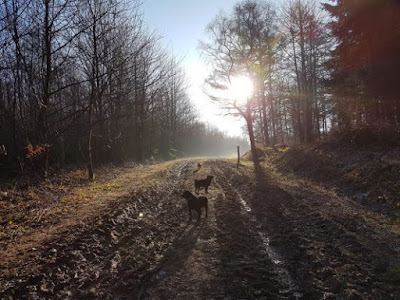 I slept through till after eight o’clock this morning. I would have slept longer had the dogs not been barking for absolutely no reason whatsoever.
I came downstairs to the smell of sausages; "er indoors TM" was cooking herself a hot cross bun. Since when have they smelled of sausages? The dogs all got over-excited when they saw me; Pogo and Treacle staged a game of tug-o-war with a cushion to celebrate. I wish they wouldn’t do that.

I made some toast and shared the crusts with three dogs whilst peering into the internet.
I couldn’t believe one thing I saw on-line. I generally don’t do Twitter, but June Mummery MEP (Brexit party) had tweeted about the EU “The big question now is, who will be here to hold these people to account while they still control Britain’s waters, but the UK has no representation?” Obviously fisheries are very important to her. Ms Mummery is also the managing director of BFP Eastern Ltd, fish market auctioneers who operate in Lowestoft. … has no one told her that *she* as an MEP was holding the EU to account, but as a Brexit party MEP *she* had decided not to do so.
Some of my loyal readers have claimed not to understand politics, so I’ll spell this one out. Someone who has been elected to the European Parliament with the single policy of having the UK leave it!!! was making the point that the UK’s membership of the European parliament was a good thing.
Is she right or wrong? Don’t know and (at this stage) don’t care. But here we have someone shouting “BLACK”!!! but voting white.
Have I ever mentioned that I don’t think democracy is as good as it is cracked up to be?

I scraped the ice from the car, got the dogs on to their leads, and drove up to Kings Wood. The lower car park was full, so for a change we went to the upper car park and walked the part of the wood we’ve not walked for ages. It was very pretty, the mud was still frozen (which was for the best), and we had no “episodes” with the few other dogs that we saw at all.
As we walked I found one or two footpaths that might form the basis of a new series of geocaches… I could probably get a series of fifty or more caches out, but then again so could someone else. Maybe this could be a project for next year?

We came home; the dogs were snoring within seconds. I had planned to have a go at the broken bathroom heater, but "er indoors TM" sent me a message to say she’d bought a new one. So I had a sandwich and went off to bed for the afternoon.

I got up, and watched some more of “Schitt’s Creek”. "er indoors TM" will be home soon. She’s (hopefully) going to feed me, an then I’m off to the night shift.