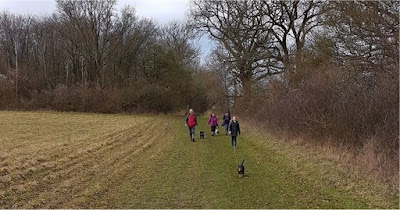 As I scoffed my morning toast and peered into the Internet it occurred to me that I should really have taken a photo or two last night when we all met up in the pub. Judging by my Facebook feed we were probably among a very small minority of people who didn’t have an early night last night so as to be up early this morning to see the meteor shower. Mind you it would seem that those who were up to see the meteors ended up seeing clouds instead.

We soon got to Camer park where we met Karl, Tracey and Charlotte, and we wet off on a walk. It was a tad cold as we started off, but it eventually warmed up. We’ve walked from the Camer Park car park before, but I don’t remember this route. It started off with quite a bit of road walking, but eventually diverted off across the fields. There was quite a bit of downhill, but oddly there didn’t seem to be that much “up”. There was quite a bit of mud, but I suppose that nearing in mind the amount of rain we’ve had lately that is really to be expected.
Geocache-wise the walk was something of a disappointment. Whilst there seems to be a definite lack of new caches going out I don’t want to be discouraging. But we hunted for sixteen caches along a five-mile route. There was space for at least twenty-five. And they weren’t easy finds. With iffy co-ords and one of the caches effectively buried we were out for at least an hour longer than we might have been. I’ve always said that some people who hide caches want them to be found, and some don’t. These ones aren’t supposed to be found easily.

With walk walked we adjourned to the nearby George Inn in Meopham where we had a particularly good bit of dinner. Fresh bread and rather spicy olives, beef and horseradish sandwiches… and decent ale too (unlike last night’s debacle).
I slept all the way home…

I took a few photos whilst we were out. Once home I showed them to the Internet as the dogs snored around me. I then perused the geo-map looking for somewhere for next week’s adventure. Dartford looks vaguely promising.
"er indoors TM" then set off to the Saturday film night. I ironed my shirts whilst watching episodes of the new season of “Lost in Space”. I stayed awake, so it must be good. Mind you, the dogs all snored all evening. I see that as a sign that they all had a good day. I’m pretty sure they did…