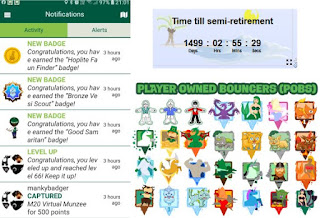 I had a rather cold night. For no explicable reason I wasn't allowed more than six inches of the duvet and so spent the night huddled under what small amount I was spared. Eventually I got up hoping I might be warmer in front of the telly.
I was.
As I scoffed my toast I watched more of "Schitts's Creek" whilst Fudge snored on the sofa. I should follow his example; he's long established that you get a more restful night downstairs.

I set off to work rather earlier than i might; I'd seen on the Munzee map that four bouncers had appeared overnight in positions where I might get them on a (rather circuitous) trip to work. I set off hopefully.
As I drove the pundits were all a-twitter about Prince Harry's decision to jack in being a Royal. Personally I feel he has probably done the right thing in wanting to step back, but probably went about doing so in the wrong way. By not telling anyone before making his announcement he's just alienated himself. The media all seem to have decided against him, or specifically against his new wife. Apparently she wants to be a "celebrity", but not a "Royal". The implication being that a "celebrity" can do what they like, but a "Royal" has obligations and standards. Who wants those?
As I drove I found myself wondering if today was national "Drive Like a Cock" day; everyone was driving like cocks, with no one having any regard for anyone else.

Having capped all four bouncers (as you do) I drove on to Aldi where I deployed a Munzee in the bike sheds. It's been years since I deployed anything in a bike shed. I can remember it being somewhat more exciting that today's exploit was.
I then went and did a little shopping. Last week Aldi was full of keep-fit gear. Today it was heaving with baby clothes.
As I shopped I found myself following some woman who was bellowing into her mobile phone. Apparently she'd "told her that several times". I have no idea who she told, or what she's told them, but her conversation was certainly enthralling. I suspect it would have been less enthralling had I been able to hear both sides of it. But there is never anything as interesting as someone else's business, is there?

I went on to work where I did that which I couldn't avoid. With less than one thousand five hundred days to go until I can semi-retire, today I wasn't really feeling it.

Once home, "er indoors TM" boiled up a rather good bit of dinner then went off bowling. I made myself a cuppa, and in doing so realised that the milk went off five days ago. I made another cuppa, and watched last night’s episode of “SAS – Who Dares Wins”. I do like that show – sometimes it makes me wonder if I should have gone into the armed forces.
As that show finished I found myself watching a documentary about Peter Ball. When I was a lad in Hastings I was rather wrapped up in the church, and at the time everyone thought that Peter Ball was *the* man of the moment. It turns out that at the time he was a rather prolific paedophile…
We had no idea.