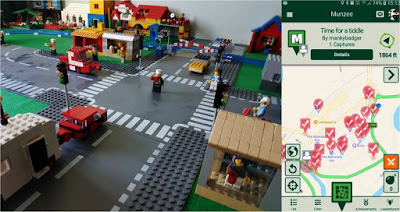 The original plan for today had me working the early shift, but a colleague asked me if he could work today instead of me. I was only too happy to oblige. So instead of driving off to work at half past six, I didn’t get up until half past eight.
Finding some hot cross buns in the kitchen I toasted a couple of them for brekkie much to Fudge’s disgust. Raisins are poisonous to dogs, and so he got none of my brekkie this morning. Mind you he didn’t seem hungry; he sat next to me and made strange whining noises. I think his back was hurting him again. I quietly fussed him.

As I stroked my dog and scoffed hot cross buns I peered into the Internet. Some of the people who post on the vintage Lego pages were selling stuff. I probably spend too much money on Lego which is forty years old, but there is a limit. This morning people were talking about Lego sets which were bought when I was ten years old and have sat unopened ever since. One particular Lego train set was being discussed; someone claimed to have sold one of these last year and said he’d got six thousand pounds for it. Six thousand pounds!! You can get the same thing far cheaper, but you pay far more if the box is unopened.
Toys in unopened boxes always command a higher price than toys which have been mauled about, but how does anyone know what toys are going to be worth a fortune in years to come, and what toys will just be forgotten?

Being at something of a loose end I gave myself a haircut, and then played Lego for a bit. My figure-of-eight train track took up a lot of space, so I took out the middle section and now have quite a bit of table free now. I’ve a vague plan to move the houses forward and build some rather bigger ones to go at the back. I shall have to give it some thought.
Did I ever mention I have a Lego town in the attic?

"er indoors TM" dished up some cheese on toast for dinner, then we went down to Rye to walk the dogs and to do a little Munzee-ing. The walk could have gone better had Pogo not tried to pick quite so many fights; it was with a sense of relief when another dog would start the barking.
Rye is an odd place. Not one person in a hundred was looking where they were walking. The pavements are far too narrow, the cobbled streets are (frankly) dangerous, the shops are run by arrogant supercilious twerps and are all selling vastly overpriced rubbish. I really can’t see why the place is so popular. On the plus side we got over one thousand five hundred Munzee points each, so the afternoon was a good one.

We came home, and I did a little geo-puzzling. After some brain-strain and some Google street viewing I came up with five final locations for geocaches that looked promising.
"er indoors TM" drove "Daddy’s Little Angel TM" home, and I ironed shirts. As I ironed I watched the last episode of “Flowers”; a series which started really well and ended as being just weird. I then watched several episodes of “Schitt’s Creek” which were all rather good.
"er indoors TM" then came home and boiled up some pizzas which we scoffed whilst watching tonight’s episode of “Doctor Who”. It was one of the better episodes but bearing in mind the very low standard of that show over the last few years that’s not saying much. The writers could improve the show beyond all measure by getting rid of the Doctor’s hangers-on and replacing them with characters that aren’t as dull as ditchwater.